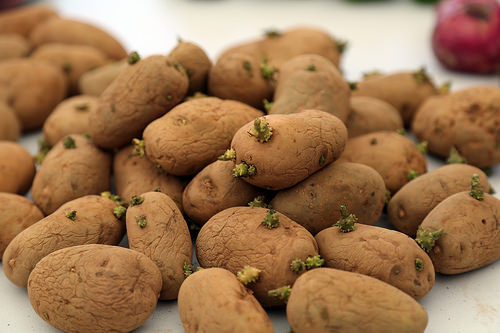 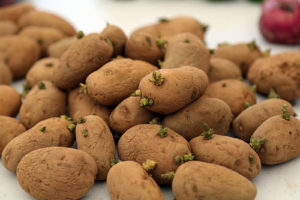 No, Potatoes are not Paleo!

But I Thought Potatoes Are Healthy?

Potatoes are indeed healthy, nutrients wise. It is a tuber that grows underground.  It provides nutrients such as fiber, Vitamins B6 and C, copper, manganese and potassium. It is rich in phytochemicals like carotenoids, flavanoids and caffeic acid. These potato contents are known to help protect against certain cancers and cardiovascular diseases. They protect the arteries from being clogged.

Potato also has kukoamines that are known to lower blood pressure, according to the research study conducted at the Institute for Food Research in Norwich.

It Is About the Carbs!

Strict Paleo dieters exclude potatoes in the Paleo diet list because of one major reason – Carbohydrates.

Potatoes are very high in complex carbohydrates and starch is the main source of it. A single potato has 10 percent or 29.1 grams of carbohydrates.

Glycemic Index is a measure of how food can increase blood glucose.  Potatoes, specifically white potatoes are high in glycemic index which means that they contain more carbohydrates. When eaten in excess, the carbs in potatoes can raise the blood sugar and therefore has more potential in setting off metabolic complications.

If you’re one of those few individuals who are aiming to gain weight, then potatoes can be an ideal food source to help you do so in a healthy manner. But not all people can process dense carbohydrates in a healthy way. It depends on one’s metabolic condition and activity level. Unutilized carbohydrates can be stored as fat instead of being available as source of energy. If you have a damaged metabolism, you are likely to gain weight if you add potatoes on your daily diet.

Other Things You Need To Know About Potatoes

Acrylamide is a harmful substance that is produced when starchy foods are cooked.  Acrylamides are also present in cigarette smoke and in some consumer products such as adhesives and plastics.  Exposure to  acrylamide poses a risk to several types of cancer,  another reason to avoid potatoes.

White potatoes belong to the nightshade family, a group of vegetables that contain glycoalkaloids (saponins) that can trigger leaky gut syndrome on people with low tolerance or intolerant to them. Glycoalkaloids act as toxins to protect the potato from being consumed by predators. They create holes in the gut lining which increases intestinal permeability.  If you have an autoimmune disorder, potatoes can impose a threat on your gut health.

Because most of the carbohydrates in potato come from starch, people with digestive issues like IBS or those suffering from bacterial overgrowth in the small intestine will have a hard time breaking down the starch. It can also wreak havoc to people who are insulin resistant.

Are You Willing To Take the Risks?

I am not saying that potatoes are unhealthy. If you think you are fit and lean enough, like you are an athlete or very active person, go ahead, grab and chunk on those potatoes!

But then again, potatoes are not Paleo! They are full of carbohydrates and antinutrients and if not eliminated, eating this everyday can lead you to your own grave!

“Potatoes should be limited, or even outright eliminated, for this (large) subset of the population. For the lean and active, however, I don’t think a few red potatoes with dinner are anything to worry about.” – Dr. Loren Cordain

The Paleo Diet. Are Potatoes Paleo?

Robb Wolf. Meat & Potatoes: Back on the Menu