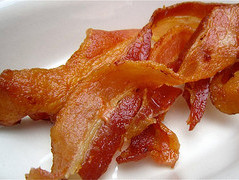 Yes, Bacon is Paleo, but…

While both pork and pork fat (lard) are considered paleo, it’s important to remember that modern industrial farming practices result in many pro-inflammatory toxins being stored in the fat of the animal. This means that when you stuff your face with bacon, it really should come from a healthy, pasture raised animal. Or maybe even a wild boar… just sayin’ – that’s really paleo!

While it’s not always convenient, finding good bacon is very important and here’s how you do it.

While paleo experts agree that well sourced, clean pork is definitely paleo, there is some disagreement about bacon in particular.

Some say that the nitrates and nitrites used to cure the pork can lead to cancer if consumed without ample vitamin C, while others think that this isn’t an issue.

What the Experts say about Bacon, is it Paleo?

“There’s no reason to fear nitrates and nitrites in food. No reason to buy nitrate-free, uncured bacon. No reason to strictly avoid cured meats, particularly those from high quality sources (though it may make sense to limit consumption of them for other reasons). In fact, because of concerns about trichinosis from pork, it makes a lot more sense in my opinion to buy cured bacon and other pork products. I do.” – Chris Kresser

“I think there’s room for bacon on a fairly regular basis. Personally, I often eat a few strips with an omelet in the morning, but just as often I use it as a garnish – a dash of bacon pieces in a salad, or in a scallop dish, for example.” – Mark Sisson

Couldn’t find a nice quick quote from Robb Wolf or Terry Wahls about bacon, but a quick search of their websites shows a several recipes including either bacon or bacon fat.

Other Names for Bacon