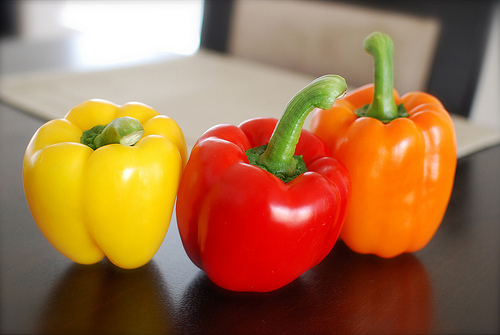 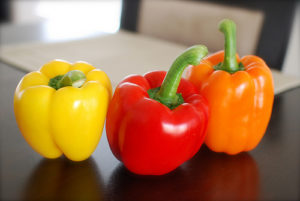 Bell pepper is the fruit of certain plants in the family Capsicum (nightshades). It is related to eggplants, tomatoes and chilli peppers and are native to Central and South America. Bell pepper is commonly red and green in color but other varieties come in yellow, orange, purple, brown and even black. The green and purple ones have slightly bitter taste while the red, yellow and orange are sweet and fruity.

Bell pepper has a beautiful bell shape with glossy skin and usually features three or four lobes. It has a sweet, tangy taste and crunchy texture. Capsaicin is the compound found in peppers that give bell pepper its slight “hot” taste.

The mild sweet flavor and fresh crisp of bell pepper makes it a perfect addition to dishes like pizza, salads, soups, stews and dips. It can be consumed raw or cooked.

This Paleo food is low in Saturated Fat, Cholesterol and Sodium.

With all the vitamins, minerals and antioxidants found in bell pepper, it is indeed a healthy Paleo food. Below are the astounding benefits of bell pepper:

But Bell Pepper is a Nightshade!

Bell pepper belongs to the Solanaceae family, commonly known as nightshades. These include tomatoes, potatoes, eggplants and peppers. We already know that nightshades can cause musculoskeletal problems such as arthritis and joint pains to some people. If you are one of the few that are nightshade intolerant, then might as well stay away from bell peppers.

Other Names for Bell Pepper

What Experts Say About Bell Pepper

Along with carotenoids and lycopene, bells supply nearly three times your daily value for vitamin C, all of your daily vitamin A requirement (as beta carotene) and a nice dose of B6. – Mark Sisson

All you ever wanted to know about Bell Pepper and Paleo

SF Gate. What Are the Benefits of Eating Green Bell Peppers?