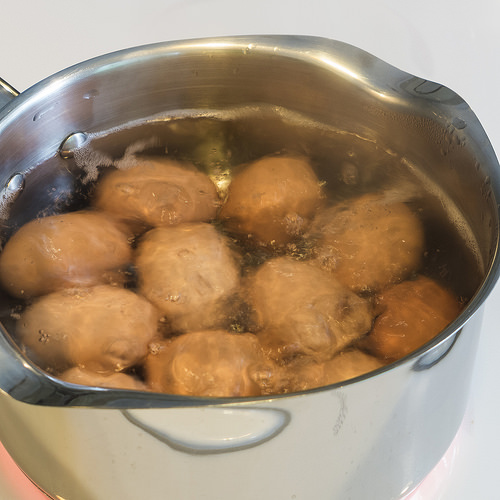 Boiling is not Paleo! 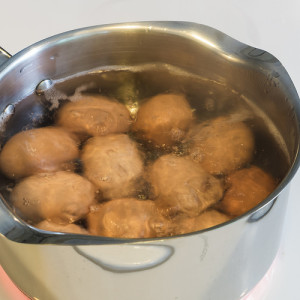 Most Nutrients are Destroyed in Boiling

Boiling is a cooking technique where the food is immersed in boiling water or water-based liquids to cook. Foods that are suitable for boiling are vegetables, meats, eggs, sauces and soups. With boiling, the water reaches its highest possible temperature at 212°F.

Boiling is safe and simple and is appropriate in large-scale cooking. Tougher cuts of meat can be made digestible through boiling. Flavorful stock is produced after boiling the food. Some harmful chemical compounds of food can be zapped in boiling. Boiling can reduce the amount of AGE’s (Advanced Glycation End Products) on meat which causes serious illnesses in the human body. Boiling too can get rid of bad micro organisms that may enter our body and cause damage to our digestive systems.

When the meat reaches the temperature of  464 degrees Fahrenheit, the fats are melted away. Boiling can slightly reduce the fat contents of meat but not get rid of it.

Though some nutrients are preserved in boiling, when the water used is drained, many of the water soluble vitamins and minerals on an average of 10-20% are lost along with the antinutrients. The longer the food is submerged in water, more vitamins are seeped out. There is increased loss in vitamins when vegetables are exposed to heat like when boiling. With some meats, some proteins and most of its aromatic compounds and minerals are lost through osmosis.

How to Retain Nutrients of Food in Boiling

Since boiling can decrease the nutrient contents of food, there are some ways to retain most of these nutrients.

Some foods do not require much water to cook them. The amount of water to be used in boiling can be decreased to minimize the nutrients that go away with water.

The nutrients in food can be kept in boiling if the water used in boiling is utilized for other purposes and not just discarded. Best way to do it is to use the boiled water as soup base or stew as an addition to your meal.

Be aware of the cooking time of food. Not all foods cook at the same time. Since vegetables have different cooking requirements, it is best to boil different vegetables that  you want to cook separately . This will prevent overcooking and will decrease the nutrient loss of food.

Click here to see what other cooking methods are Paleo.

All you ever wanted to know about Boiling and Paleo

Food Lorists. What is the healthier way to cook meat?
http://foodlorists.blogspot.com/2007/10/what-is-healthier-way-to-cook-meat.html