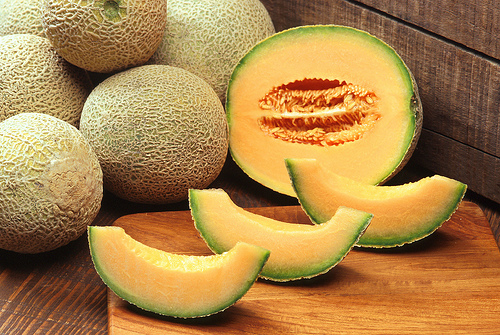 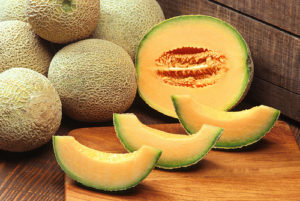 Often called rockmelon or muskmelon, cantaloupe is a fruit from the gourd family known as Cucurbitaceae.  It is the same family as melon, squash and cucumber. Cantaloupes have hard skin that consists of “netting”, an orderly mosaic pattern. They have sweet and juicy flesh that is usually salmon-pink in color. The insides of cantaloupes are hollow with its center filled with edible seeds. They originally came from Africa, India and Iran and are available during spring and summer.

Cantaloupes are usually eaten as fresh fruits and can be made into salad, ice cream or custard.

Fresh cantaloupes are composed of 90% water. It contains high levels of vitamins and minerals such as vitamins A, B6 and C, magnesium, manganese, potassium, niacin, dietary fiber and folic acid.

Cantaloupes are rich in antioxidants and phytonutrients. The carotenoids found in cantaloupes are found to be 30 times higher than that of orange. These include lutein, beta-cryptoxanthin and zeaxanthin.

When the seeds of cantaloupes are eaten, it can also provide significant amounts of omega-3 fat in the form of linoleic acid. Cantaloupes have an estimated glycemic load of 4. This Paleo food is very low in cholesterol, saturated fat and sodium.

The best about cantaloupes do not end with its nutritional content. In fact, this delicious fruit has a wide variety of health benefits!

Cantaloupes are high in antioxidants which are protective of the cardiovascular system and immunity. These antioxidants and phytonutrients can help prevent oxidative stress and excess inflammation. People who normally eat cantaloupes have lower levels of C-reactive protein (CRP), a substance produced by the liver that acts as a marker to assess levels of inflammation in the body.

The high doses of vitamin C in cantaloupes work well with the antioxidants that fight against free radicals. Vitamin C is known to scavenge free radicals that cause diseases. It acts as a defense for a healthy immune system. Vitamin C also stimulates production of white blood cells that destroy bacteria, virus and other foreign substances in the body.

Cantaloupes have high levels of carotenoids which are beneficial for keeping the eyes healthy. It can protect against cataract formation and macular degeneration.

Cantaloupes are also rich in dietary fiber which is essential in maintaining regular bowel movement. Fiber can add bulk to the stool, ensuring smooth flow through the digestive tract and colon and reduces the chances of constipation and other gastrointestinal conditions.

Though not yet tested in human, studies on cantaloupes have been linked to improved insulin metabolism, preventing blood sugar spikes.

With beta carotene acting as antioxidants in the body, it protects against harmful toxins and therefore slows down the aging process.

Another benefit of having high amounts of carotenoids is that it can reduce the risk of a number of cancer types. The phytochemicals found in cantaloupes have anti-tumor behavior and can fight against free radicals which can cause cancer.

Cantaloupes make a great Paleo snack. Surprisingly, there are no concerns regarding consumption of this delicious fruit aside from the sugars in it.  So enjoy eating every bite of it in moderation.

Other Names for Cantaloupe

What Experts Say About Cantaloupe

“Some low-carb guides will recommend melons, but you do have to be mindful of which ones you’re going for. Both cantaloupes and watermelons are very high in sugar (GI: 65, 100 respectively). We recommend making melons a rare treat.” – Mark Sisson

All you ever wanted to know about Cantaloupe and Paleo