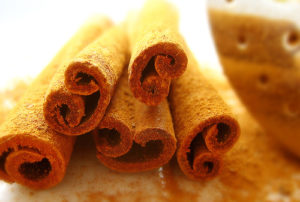 Cinnamon and Its Types

Prized for its medicinal properties for thousands of years, cinnamon is a brown, sweet and savory spice obtained from the inner bark of various species of trees and is native in Asia Minor. Its strong flavor and scent comes from its aromatic essential oil cinnamaldehyde. Cinnamon is used in cooking to add flavor and aroma to food. It is commonly used in savory dishes, soups, chocolates, coffee, pies, buns, desserts, candies, teas and liqueurs.

There are multiple varieties of cinnamon but the two main types are Ceylon or true cinnamon and Cassia cinnamon. Cassia cinnamon is the cheaper variety that can be found in local grocery stores because the trees come from China and more widely available. It has a stronger flavor with less sweetness. Its color is darker, red brown. Cassia sticks are also hardy.

Ceylon cinnamon on the other hand comes from the inner bark of cinnamomum zeylanicum tree that grows in Sri Lanka and Thailand. It is rarer and more expensive compared to Cassia cinnamon. The taste of Ceylon cinnamon is lighter, sweet and delicate and its color is brown. The Ceylon cinnamon sticks are thinner and more brittle too.

While often seen in jars as flavoring, cinnamon is a nutrient dense spice and is known for its healing properties. It contains high amounts of fiber, manganese, calcium and potent antioxidants. Cinnamon has been used as remedy to combat inflammation and reduce levels of blood sugar and cholesterol. In traditional medicine, cinnamon has been used to treat cardiovascular, gynaecological and respiratory illnesses.

Cinnamon contains special compounds that have noteworthy health benefits. It is best obtained when cinnamon is in extract form when all the active components are concentrated in high doses.

Cinnamon has the ability to regulate blood lipids and prevent plaque from building in the arteries. It can lower blood cholesterol and blood pressure levels in the body. Cinnamon is found to be a blood coagulant that has anti-clotting effects. It also increases blood circulation.

Cinnamon is known to control blood sugar levels and increase insulin production that may prevent diabetes. It works directly on the muscle cells forcing them to remove sugar from the bloodstream. Polyphenols in cinnamon boost the levels of certain proteins responsible for glucose transport, insulin and inflammatory response.

The high concentration of antioxidants in cinnamon, such as polyphenols, can help protect the body from the harmful effects of free radicals that can lead to inflammation, cancer and other diseases. It can also slow down the aging process.

Cinnamon is a natural antimicrobial, anti-fungal and antiviral agent. These properties come from the substance called cinnamaldehyde which gives cinnamon its aroma. Cinnamon has the ability to boost immune system and fight against harmful infections and viruses. Cinnamon oil has been effective in treating respiratory tract infections caused by fungi. It has anti-microbial effects that may help prevent tooth decay and reduce bad breath.

Study shows that cinnamon contains antioxidants that have potent anti-inflammatory effects which can help lower risk of certain diseases. Cinnamon can reduce both systemic and specific inflammation that leads to chronic diseases such as arthritis.

Another benefit from the antioxidants found in cinnamon is that they can protect the brain against neurological disorders like Parkinson’s and Alzheimer’s diseases by activating neuro-protective proteins that guard the brain cells from mutation.

The cinnamaldehyde in cinnamon has anti-carcinogenic properties that can protect against DNA damage and inhibit cell mutation and tumor growth, therefore lowering the risk of certain cancers.

Be Cautious of Your Cinnamon Intake

While cinnamon offers a lot of health benefits, it is to be considered the right type to incorporate into your diet. Both types of cinnamon, Ceylon and cassia contain a compound called coumarins which are believed to potentially damage the liver when consumed in excessive amounts. With the two types of cinnamon, Ceylon contains lesser amount of this compound compared to cassia. It has been a better option in producing cinnamon extracts especially in high doses.

Unfortunately, Cassia is the more available type of cinnamon found in groceries. Nothing to fear though because cinnamon is not consumed in high amounts anyway. Unless you are eating the powder itself, then that can cause a big problem!

What Experts Say About Cinnamon

Besides its versatility in sweet and savory foods, cinnamon has been shown to have health benefits ranging from lowering cholesterol and blood sugar to preventing yeast infections. – Robb Wolf

All you ever wanted to know about Cinnamon and Paleo