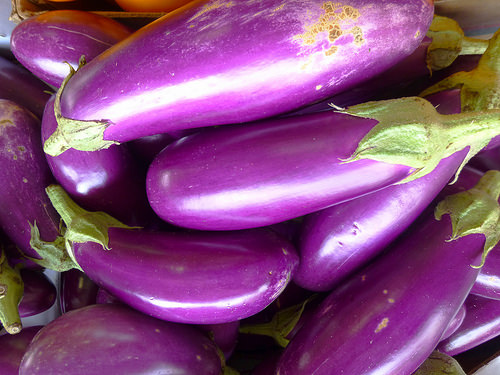 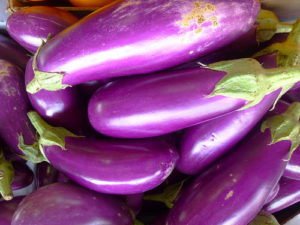 When We Were Told That Eggplant is a Vegetable…

I remember when I was a child, I was told that eggplant is a vegetable. This vegetable with glossy, purple skin has a unique taste and spongy texture (for some, it tastes bitter!) and it contains numerous edible, small seeds.

Eggplant is actually a fruit that came from the plant family of Solanaceae commonly known as nightshades. It is a kin to tomato, potato and bell pepper but botanically, it is classified as a berry. Eggplant grows similarly as tomato. They both grow hanging from the vines of a plant.

Eggplant is also known as aubergine in France. The reason why it was thought to be a vegetable is because of its low sugar content. It is widely used in cooking.

Apparently, most vegetables and fruits contain a host of vitamins, minerals and phytonutrients. This is very true with eggplant. It is a very good source of dietary fiber, mostly insoluble, which is a great prebiotic. Prebiotics help in maintaining healthy gut biome.

Eggplant is rich in vitamin B1, B6, manganese, potassium,and folate. Potassium helps in the regulation of blood pressure and it keeps the body hydrated.

Phenolic compounds such as caffeic and chlorogenic acid and flavanoids like nasunin are present in eggplant. These phytonutrients act as antioxidants in the body. Cholorogenic acid, in particular, has anticancer, antimicrobial, antiviral and anti-DL (bad cholesterol) properties. Nasunin on the other hand is an iron chelator. Too much iron in the body increases free radical production. This is what nasunin does, it lessens the free radical formation including protecting blood cholesterol from preoxidation and it prevents cellular damage that can cause cancer.

But Eggplant is a Nightshade!

Most nightshade plants contain a chemical substance called alkaloid. This substance acts as natural pesticide. Steroid alkaloid above all has shown to block certain nerve activity which can result to muscle shaking, respiratory difficulty and even paralysis. It has also been associated with joint inflammation. Some nightshade foods including eggplant contains trace amounts of nicotine.

As mentioned above, eggplant is a member of the nightshade family but it only contains a very small amount of alkaloid. In addition, not all alkaloids are dangerous. Some can provide health benefits such as antioxidant and anti-cancer properties.

We have discussed on our previous post on potato that while most people don’t have a problem with nightshades, they can cause digestive issues and inflammation to those who are intolerant to this; one major reason to avoid eggplant by people who have autoimmune diseases.

If you are someone who used to eat eggplant and never experienced any ill effects afterwards, you can consume it in moderation. You can also steam, boil or bake eggplant as cooking can reduce the alkaloid levels to nearly half.

What Experts Say About Eggplant

“Specifically, eggplant is seen as an excellent source of fiber and a good source of potassium – which is important for keeping the body hydrated and also plays a role in regulating blood pressure. However, eggplants are perhaps best known for their high levels of chlorogenic acid, a potent antioxidant that is thought to offer protective benefits against cancer and an assortment of viruses.” – Mark Sisson

All you ever wanted to know about Eggplant and Paleo