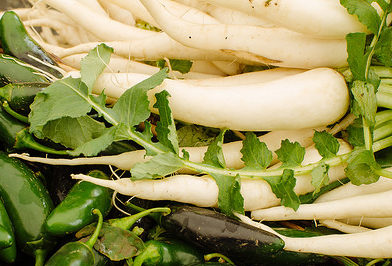 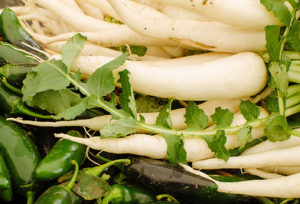 Raphanus sativus commonly known as radish is another edible root vegetable that belongs to the Brassica family along with cabbage. Radish has been grown and consumed before Roman times in Europe and around the world and is mostly eaten raw as a salad vegetable. It offers a crunchy, peppery taste and its shape and size may vary depending on its type. Some radish can be globular, tapering and cylindrical in shape, which color ranges from white to red with white flesh and green to black. The sharp, pungent flavor of radish comes from the isothiocynate compound that it contains.

Some common types of radish are daikon, Black Spanish, green and watermelon. Daikon radishes are native in Asia. They grow during winter season and has elongated, smooth, icy-white roots. Black Spanish radishes have more powerful, peppery taste compared to other varieties. It can be round or elongated in shape. This type is native in England and France. Green radishes are native to Northern China. Its flesh has a dark green color. It tastes sweet and has a milder pungent flavor. Lastly, watermelon radishes are similar to watermelon, hence the name. It has a less peppery and mildly sweet taste with a watermelon like flesh.

Radish is very nutritious and has a juicy inside which makes it ideal for salads, soups, main dishes and even smoothies. Almost all parts of the radish can be eaten including the leaves, flowers, pods and seeds. Radish is available all year round but is most abundant between June and September.

Radish is not something that is normally bought or consumed but it is definitely one of the nutritious root-vegetables around. It fits perfectly into any diet including Paleo.

Radish is high in vitamins, minerals and water with very low saturated fats and cholesterol. Vitamin C is one of the most abundant content of radish which is about 30% of the recommended daily allowance. Radish is also rich in B vitamins, folic acid, potassium, flavanoids, dietary fiber and antioxidants. It also contains significant amounts of calcium, magnesium, copper, riboflavin and manganese.

There are countless reasons why radish should be included in one’s diet. Below are the health benefits that radish has to offer:

Vitamin C is a natural powerful water-soluble antioxidant present in radish in high amounts. It  also contains zeaxanthin, lutein and beta carotene, which are flavanoid antioxidants. Vitamin C is required by the body for the synthesis of collagen. These antioxidants help scavenge harmful free radicals in the body.

Radish contains isothiocyanate sulforaphane which is an anti-oxidant compound that has proven role against prostate, breast, colon and ovarian cancers. Sulforaphane together with vitamin C inhibits cancer-cell growth and cyto-toxic effects on cancer cells.

Because of the high amounts of vitamin C in radish, it is indeed a nutritious food that can help improve immune system. It helps fight diseases from common colds to cancer, and boost immune system. Vitamin C can also help regulate metabolism.

The anthocynanins that give radish its color are linked to reduced occurrence of cardiovascular diseases. Potassium, which is another abundant content of radish aids in regulating blood pressure by relaxing the blood vessels and increasing blood flow.

The sulfur-based compounds found in radish increase the flow of bile. This is important in improving digestion and maintaining healthy gall bladder and liver.  Radish is also considered roughage, which means that it is composed of indigestible carbohydrates. This facilitates digestion, water retention, and prevents and relieves constipation. The water in radish can soothe both the digestive and excretory system, further relieving the symptoms of piles. The relative amounts of dietary fiber in radish can also add bulk to bowel movements which can also aid in preventing constipation.

Because of the water that radish contains, it is also considered as diuretic. It can increase frequency of urination and can help in preventing inflammation and burning sensation during urination. This can clean out the kidney by washing away the toxins accumulated in it therefore treating kidney disorders.

Radish have very low glycemic index and consumption do not have impact on the blood sugar levels. This can be a super food for people suffering under diabetes.

Bilirubin is a condition on which a yellow tinge in the skin, mucus membranes and eyes are present. Consumption of radish has been linked to the removal of this type of jaundice.

Another benefit that vitamin C offers is its anti-congestive property. This helps in minimizing congestion in the respiratory system caused by common colds, infections and allergies, thus preventing diseases such as bronchitis and asthma.

And because radish is a member of the brassica family, it may contain goitrogen, a plant-based compound in cruciferous vegetables that may cause swelling in the thyroid gland. Healthy people who do not have issues with the thyroid can consume it without any problems. But for people who are intolerant with goitrogens, it can still be consumed in moderation but make sure to cook it first as cooking cruciferous vegetables can often remove the goitrogenic compounds in it.

What Experts Say About Radish

Although we certainly appreciate the radish’s beauty – often attacking them with a few skillfully placed knife slices to create a beautiful rose garnish for dress-to-impress dishes – this cruciferous vegetable is held in higher esteem today for its health benefits. – Mark Sisson

All you ever wanted to know about Radish and Paleo

Nutrition and You. Radish nutrition facts