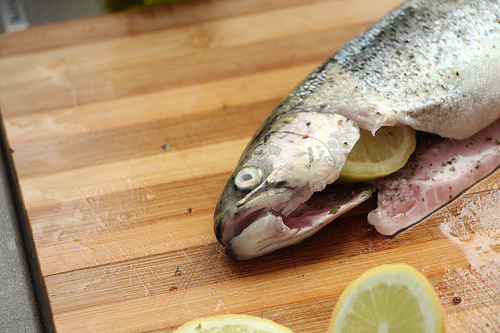 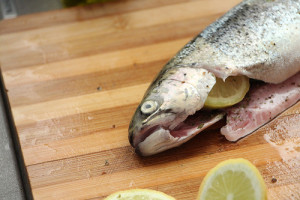 What is a Trout?

Trout is one of the healthiest fish that you can incorporate into your Paleo diet. It is closely related to salmon. Most trout live in fresh waters. Like salmon, it is also classified as an oily or fatty fish. Trout is bony and its flesh is tasty. The flavor of its flesh is determined by what the trout eats. Trout that feeds on crustaceans are more flavorful compared to those that eat insects. Normally trout has a tender flesh with mild and somewhat nutty flavor. Trout can be both wild caught or farmed.

Rainbow trout is the most common specie of trout that can be eaten. It is low in sodium and rich in minerals such as thiamine, riboflavin, niacin, phosphorus and selenium. It is power packed with protein, vitamin B12 and manganese.

Among the other oily fishes, rainbow trout has been known to have the lowest amount of dioxins, a type of environmental contaminant.

There are a lot of trout species and three of them are very common and receives the most attention in the United States.

Why Trout is Good for You!

Fish such as farmed rainbow trout is a lean and healthy source of protein, minerals and omega 3 fats. That is why it should be added in your diet twice a week.

Trout is one of the best sources of Omega 3. Omega 3 has anti-inflammatory properties. A diet that is rich in omega 3 fatty acids can lead to decreased risk of cardiovascular diseases, hypertension, high blood pressure and certain types of cancer. Omega 3 is also associated in preventing neurological disorders such as dementia, depression, bipolar disorder and Alzheimer’s disease.

Another health benefit that trout can give is that it has outstanding amount of vitamin B12 and niacin which helps in lowering bad cholesterol and plays a key role in metabolism.

Trout provides a decent amount of protein and amino acids. Based from studies, people who obtain approximately 25 percent of their caloric intake from lean protein are more likely to lose weight and retain leaner muscles together with exercise.

Farmed trout contains low levels of mercury and PCB which makes it safe for consumption even for pregnant women as it will not impose threat to health.

What Experts Say About Trout… Is It Paleo?

“In the past two decades, perhaps the single most important dietary recommendation to improve our health and prevent chronic disease is to increase our dietary intake of omega-3 fatty acids which are found primarily in fatty fish.” – Dr. Loren Cordain

As for those species that offer both high omega-3s and low toxin risk… Farmed rainbow trout gets a thumbs up from many sources on both these fronts.” – Mark Sisson

All you ever wanted to know about Trout and Paleo

SF Gate. Is Trout Good for You?
http://healthyeating.sfgate.com/trout-good-you-2923.html

Other Names of Trout