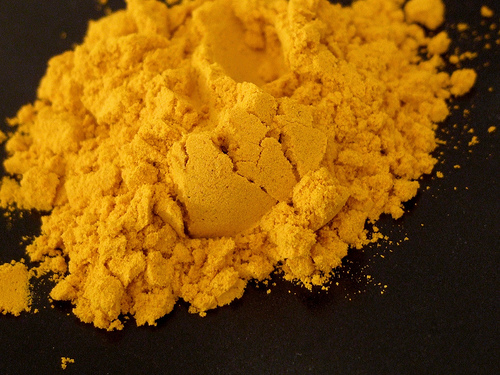 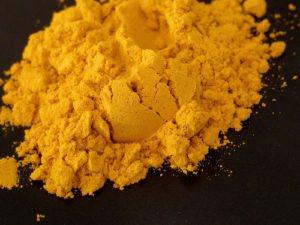 A Popular in Curries

Turmeric is a root that belongs to the same family as ginger and is native in India. It is dried and ground into a vibrant, yellow-orange powder and used as a spice to add flavor to Indian food. Turmeric is the main spice used in curries and other South Asian and Middle Eastern dishes. It has distinct earthy, slightly bitter, peppery taste and the aroma is similar to mustard.

Turmeric is used for both culinary and medicinal purposes. Curcumin is the active ingredient in turmeric that gives its deep yellow color. It has powerful healing properties and has shown many spectacular benefits including the prevention of several diseases such as Alzheimer’s, Parkinson’s, cancer, heart diseases, arthritis and diabetes.

Turmeric is a very powerful, nutrient-dense spice. It contains vitamins, minerals and antioxidants but is very low in calories. It can be an effective nutritional supplement. Even when consumed in small amounts, turmeric still contains significant amounts of potassium, dietary fiber, magnesium, calcium and vitamins B6 and C.

Turmeric is of nature’s healthiest food and its many health benefits can promote overall wellbeing.  Below are the top benefits of turmeric:

Curcumin is an active compound in turmeric that acts as antioxidant and has strong anti-inflammatory properties at molecular level and it matches the effectiveness of to prescribed drugs without any side effects. As an antioxidant, curcumin can neutralize the damage brought by free radicals.  It has the ability to inhibit the activity of NF-kB, a molecule that turns on multiple genes triggering inflammation in the body. Turmeric has been found to be beneficial to people suffering from painful joints and can reduce swelling and inflammation associated with rheumatoid arthritis.

Another characteristic of curcumin is that it has the ability to manage pain. Curcumin can alleviate a wide array of pain conditions.

Curcumin is a natural remedy for Inflammatory Bowel Syndrome (IBS) including ulcerative colitis and Chron’s disease and was shown to inhibit inflammation in the colon tissues. It lessens the pain symptoms of these diseases and heals the gut. It also reduces the H.pylori bacteria activity in the gastrointestinal tract which can cause gastric cancer.

Curcumin has the ability to lower blood sugar and reverse insulin resistance. It also reduces hyperglycemia or high levels of blood sugar. Because of the anti-inflmmaytory and antioxidant properties of curcumin, one study suggests that curcumin supplementation can delay the complications associated with diabetes.

Curcumin has impact on cancer growth, development and progression. It can possibly inhibit cancer progression by reducing the ability of cancer cells to invade surrounding tissues. Several studies have proven that curcumin can be an effective treatment to various cancers especially breast, colon and skin cancers.

Curcumin has the ability to boost level of brain hormones that promotes growth of new neurons and fights against neurological disorders such as Parkinson’s and Alzheimer’s diseases through its anti-inflammatory and antioxidant properties.

Curcumin can help in reversing heart diseases by improving the lining of the blood vessels function, therefore regulating blood pressure and preventing blood clotting. It is also effective in lowering levels of cholesterol that can later on cause heart attack and stroke.

Based on studies conducted, turmeric has been found effective in treating depression. Curcumin was as effective as Prozac in alleviating systems of depression.

Having said that turmeric does not show side effects, some people may have mild allergic reaction to it when consumed in high amounts. Symptoms may include rashes, nausea, and diarrhea.

Turmeric may interfere with anti-coagulant medications such as aspirin, clopidogrel and warfarin and some non-steroidal, anti-inflammatory drugs. So be careful to consume turmeric if you are one of those taking any of the above mentioned medications.

Other Names for Turmeric

What Experts Say About Turmeric

It may not share cinnamon’s universal applicability to consumables, but turmeric is another spice with some powerful culinary and medicinal qualities that deserves our attention. – Mark Sisson

All you ever wanted to know about Turmeric and Paleo

Paleo Leap. Turmeric & Curcumin: How To Get the Anti-Inflammatory Benefits