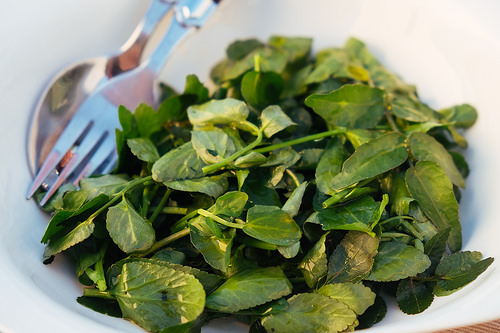 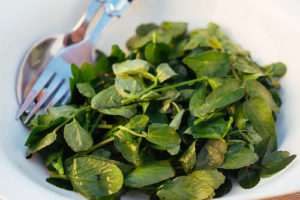 And It Is Becoming Popular….

Another member of the Brassica plant family, watercress is a green leafy vegetable which bears small, dark green, scalloped leaves that produce tiny white flowers in summer which become small pods with edible seeds. It is an aquatic plant that can be found in slow moving streams, near springs. The leaves of watercress feature a peppery and slight tangy flavor.

Watercress is native in Europe and is also cultivated in Central Asia and America for thousands of years. It was used as food and medicine. Watercress is very versatile that it can be used in salads, soups, side dishes, sandwiches and even teas.

Often overlooked in supermarkets, watercress has been known as a super food because of the amount of wide varieties of nutrients found in it. Based on a study conducted in William Paterson University, watercress turns out to be the top nutrient-rich vegetable, overthrowing all the other leafy greens in the same family. Before it was used just as a garnish but is now starting to become popular as one of the next super food because of its high ANDI (Aggregate Nutrient Density Index) score that measures the vitamin, mineral and phytonutrient contents of food against the calories it provides.

Watercress is a powerhouse of nutrients with a plethora of antioxidants, vitamins and minerals which are beneficial in promoting body health and prevention of certain diseases.  Among the nutrients present in watercress that are also available in other leafy green vegetables are vitamins A, C E, K, B vitamins and minerals such as calcium, iodine, iron, magnesium, phosphorus, sodium, zinc and dietary fiber. Watercress contains more vitamin C, calcium, iron and folate than other fruits and vegetables. . In addition, it also contains flavonoids carotene, lutein, zeaxanthin and quercetin that is known to reduce inflammation. It is also very low in calories.

As a mineral-rich green leafy vegetable, watercress offers health benefits that other brassicas do. It includes providing nutrition, boosting immunity and cancer prevention.

Watercress contains high amounts of dietary nitrates. Together with calcium, magnesium and potassium, nitrate is thought to lower blood pressure by releasing sodium out of the body and dilate the arteries. Consumption of watercress can also inhibit platelet aggregation. Cruciferous vegetables including watercress are known to lower bad cholesterol that reduces the risk of cardiovascular diseases. The vitamin C in watercress acts as an antioxidant that can help reduce tissue damage in the heart caused by oxidative stress. Folate is another mineral present in watercress which have been associated in preventing stroke.

According to studies, watercress has a compound called PEITC (phenylethyl isothiocyanate) which may prevent DNA damage in cells and inhibit breast cancer cell development. It contains gluconasturtiin, a glucosinolate compound that gives watercress its peppery flavor, which is shown to inhibit carcinogens. The flavanoids carotene, zeaxanthin, and lutein can protect from lung and mouth cancers. Watercress also contains high amounts of chlorophyll, which are effective at blocking the carcinogenic effects of heterocyclic amines produced when grilling foods at high temperature.

Watercress is rich in Vitamin A, which is essential for producing pigments in the retina, and its absence can cause night blindness. It also contains high amounts of calcium and Vitamin K which are beneficial for strong bones and teeth. Sufficient intake of vitamin K can improve bone health and calcium absorption in the body. Calcium rich food can reduce the risk of osteoporosis by repairing and building bone structure. Phytonutrients lutein and betacarotene are associated in a reduced risk of eye diseases such as cataracts and macular degeneration. One European study also suggests that vitamin C can be effective in protecting against cataract development.

Watercress contains significant amounts of folate and vitamin C which are both beneficial for cognitive function and brain health. Folate can prevent against cognitive decline and improves verbal fluency. Foods rich in vitamin C such as watercress can prevent damage and improve brain injury and function. It also plays a role in neuron building activity. Vitamin K limits neuronal damage in the brain, which is helpful in treating Alzheimer’s disease.

Vitamin C is one of the nutrients abundant in watercress. It fights infection, helps maintain healthy connective tissue, prevents iron deficiency and reduces risk of blood damage. Vitamin C also acts as an antioxidant which can fight the effects of oxidative stress in the body.

Watercress grows in water and is therefore very prone to pollutants, parasites and other impurities.  Before consumption, watercress should be washed thoroughly. It can also be submerged in cool water for about half an hour and then stored in refrigerator for 2 to 3 days to remove all these impurities.  Before eating, it should be rinsed again to make sure that none of these pollutants are left.

Other Names for Watercress

What Experts Say About Watercress

“We now know that watercress is an excellent source of beta-carotene, vitamins A, B1 and B6, C, E and K and also contains abundant iodine, iron, calcium, magnesium and zinc. In addition, it also contains a flavonoid called quercetin that is thought to reduce inflammation and serve as a natural anti-histamine”.  – Mark Sisson

All you ever wanted to know about Watercress and Paleo

The Paleo Diet. Is Watercress the New Kale?

Medical News Today. What are the health benefits of watercress?

Mercola Food Facts. What Is Watercress Good For?