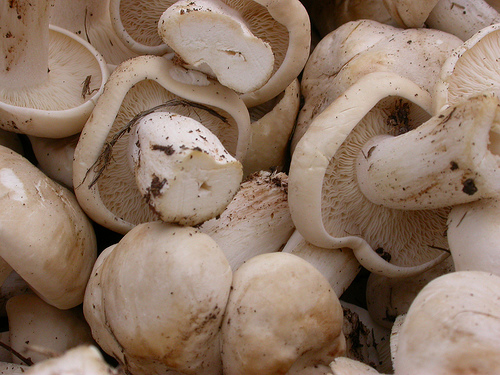 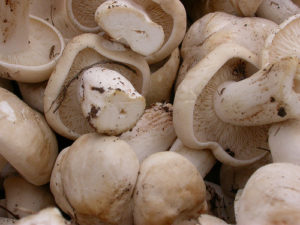 Neither Vegetable nor Meat???

Edible mushrooms are the fleshy, edible fruit of the macrofungi species which can appear either below or above ground.  They are neither plants nor animals but mostly grouped with non-starchy vegetables. They are classified as their own, being fungi. The fact that they are non-starchy means you can eat tons them regularly without gaining weight.

The edibility of a mushroom is defined by the absence of undesirable health effects on human and their taste and aroma. Mushrooms are consumed because of their powerful nutritional content and medicinal benefits. Mycophagy or the act of consuming mushrooms can be dated back to ancient times.  Mushrooms are usually eaten because of its natural “umami” taste which couldn’t be found in any other vegetables or meats.

Mushrooms come in a wide range of varieties. They can either be cultivated or wild. There are a lot of mushroom species that are edible but the most popular ones are listed below:

Crimini is a young Portobello which is a type of white mushrooms. It is darker, firmer and falavorful compared to other white mushrooms. Portobellos or the adult criminis are common in Italian cooking. Their large caps are perfect for marinating and grilling. They are good for making sandwiches and burgers. Crimini or Portobello contains a carbohydrate that increases metabolism and controls blood sugar levels. Both are ideal for weight loss and prostate cancer prevention.

Also known as table mushrooms and champignons in France, the white buttons are the most popular but less intensely flavored among the varieties of white mushrooms. They can be found almost everywhere.  It can be chomped either raw or cooked, and works well in soups and salads, and on pizzas. High consumption of button mushrooms has been linked to lowered risk ovarian cancer in women.

Shiitake or black mushrooms have black caps that curl down and have a light woody taste and aroma. They are denser, heavier, and higher in protein and iron compared to other varieties. It is commonly found in the wild but nowadays, most of them are being cultivated. It is more expensive that other mushrooms but worth the price because of the antioxidants present in it. L-ergothioneine is an example of antioxidant in shiitake which can protect the cells from oxidative stress. A polysaccharide called lentinan is also present in shitake, which are helpful in fighting tumors and boosting immune system.

Oyster mushrooms appear on the trunks or sides of a tree which give its name “tree oyster”. It is whitish in color and has a fan shape. It possesses a delicate taste and scent. Oyster mushrooms are common in many Chinese and Japanese dishes, mainly in soups and stir fries. Oyster mushrooms can aid in defending the body against viruses like HIV. They are also anti-inflammatory and wealthy in antioxidant compounds.

Chanterelle mushroom is one of the most popular among the wild ones. It is trumpet-like with a depression in the center of its cap. It is fleshy and firm and has a scent similar to apricots. Chanterelle is common to European cuisines. It is high in vitamins C, D and K and contains anti-microbial, anti-bacterial and anti-fungal properties.

Porcini mushrooms are reddish brown in color with a smooth texture and aromatic, woody taste. It is popular in Italian cooking and is called cepes in France. Porcinis are highly anti-inflammatory and can help in regulating blood pressure.

This type of mushroom is globular in shape with cascading teeth-like spines with spores. It is also known as sheep’s head. It is high in protein and tastes like lobsters. Lion’s Mane has been neuroprotective effects that may improve memory and mood. It can help with nerve damage by regenerating destroyed nerves.

Hen of the Wood

Hen of the wood or maitake is a type of mushroom that looks like cabbage from afar. It is usually found in the woods and is often sold in clusters with its soft, feathery, overlapping caps. Maitake has an earthy aroma and a gamy flavor. Its color can range from pure white to tan, to brown to gray. This type of mushroom has antioxidants which are found to inhibit various types of cancer cells.

Commonly known as Ling Zhi, reishi is a mushroom considered to be a “super food” due to its water soluble polysaccharides which has anti-cancer, anti-oxidant, anti-bacterial, anti-viral, and anti-fungal properties. It is soft, corky and flat with a kidney-shaped cap.

Shimeji mushrooms are native to East Asia but can also be found in Europe. It is very common in Japanese dishes and has a meaty taste. Its stem is usually white in color and the cap is brownish or grey. Shimeji has been also used as a traditional remedy for destroying growing tumors. They can also help to ward off diabetes and prevent asthma.

While not considered as vegetable, mushrooms are rich in vitamins, minerals and antioxidants. They are loaded with B vitamins such as riboflavin, folate, thiamine, pantothenic acid, and niacin which help to provide energy by breaking down proteins, fats and carbohydrates, B vitamins play an important role in the nervous system.

Mushrooms are also excellent, non-fortified dietary sources of vitamin D which has been shown to inhibit the growth of cancer cells by contributing to the regulation of the cell growth cycle. It also contains important minerals that cannot be easily obtained from other food sources.  This includes selenium, potassium, copper, iron, and phosphorus.  Selenium works as an antioxidant that protects the body from free radicals. Copper helps produce red blood cells which carries the oxygen throughout the body. Potassium aids in regulating blood pressure and full functionality of the muscles and heart.

Mushrooms are naturally low in sodium and calories, high in fiber and free from fats, cholesterol and gluten which make it a good addition to ones diet.

We already know how nutritious mushrooms can be but there is more to it that can be beneficial to good health. Many studies have shown that eating naturally-grown foods like mushrooms have significant health benefits to thehuman body.

Mushrooms are one of the foods high in selenium which protects the body cells from damage that might later on result to chronic diseases such as cancer. Selenium can help improve immune response to infections and prevent inflammation and tumor growth. Mushrooms can also help strengthen the immune system through L-ergothioneine, a naturally occurring antioxidant that may help protect the body’s cells from oxidative stress. The beta-glucan fibers found in the cell walls of mushrooms stimulate the immune system to fight cancer cells and prevent tumors from forming.

Fiber, potassium and vitamin C found in mushrooms all contribute to good cardiovascular health. Potassium and sodium work together in the body to help regulate and lower blood pressure and decrease risks of cardiovascular diseases. Beta-glucans in mnushrooms also help in lowering levels of blood cholesterol.

Choline is an important nutrient found in mushrooms that help with sleep, muscle movement, learning and memory. It aids in maintaining cellular membranes structure and in the transmission of nerve impulses. It also supports proper fat absorption and reduces chronic inflammation.

High-fiber diet are shown to lower blood sugar, lipids and insulin levels in people with diabetes. Beta-glucans and chitins are dietary fibers of mushrooms that play an important function in improving insulin resistance, lowering risk of obesity by participating in metabolism of fats and sugar in the body, and other chronic illnesses such as diabetes.

Another remarkable benefit of beta-glucans and chitins is that they function as a bulking agent in the digestive system that reduces appetite and increases satiety. Because mushrooms are low in carlories, only small amounts can easily make you full. This is very beneficial to people who are trying to maintain or lose weight.

What Experts Say About Mushroom

“Although there are numerous toxic and potentially lethal species of mushroom species, you should not be worried about consuming the mushrooms you find at your choice grocer. In all likelihood, our hunter-gatherer ancestors likely indulged in various types of mushrooms on a semi-regular basis, knowing the distinct properties to exclude poisonous species. Mushrooms are also relatively low on the glycemic index and are rich in selenium, potassium, riboflavin, niacin – all optimal for your health. Let the mushroom hunting adventures ensue!” – Loren Cordain

“Well, if you asked representatives from the hundreds of human cultures across the globe that have utilized wild edible fungus, the answer would be yes. Humans have probably always eaten mushrooms, since mushrooms grow wild everywhere. And I do mean everywhere. The barren North African desert has edible fungi (desert truffles)”. – Mark Sisson

All you ever wanted to know about Mushroom and Paleo

Chris Kresser. Beyond MSG: Could Hidden Sources of Glutamate Be Harming Your Health?