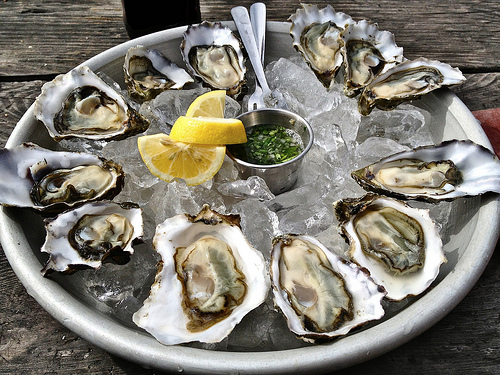 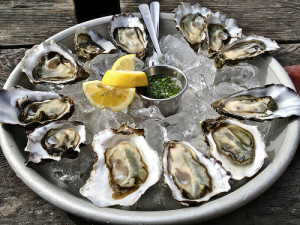 Oysters Are the Bomb!

Oysters are bivalve molluscs that live in marine or brackish habitats and are the most common farmed shellfish. Oysters depending on its kind can be consumed cooked or raw as delicacy, can be harvested for pearl production or even used as decorations.

Oysters are nutrient dense. They are an exceptional source of iron, calcium, zinc, vitamins A, B12, and C and selenium. The amino acids in oysters are rich that they can trigger increased levels of sex hormones. The high amounts of zinc in oysters aid in the production of testosterone considering them to be an aphrodisiac.

Oysters are free from environmental toxins such as mercury. The selenium that oysters have binds with mercury that protects the body from harm.

The shelf life of oysters can last up to weeks. Oysters can be eaten raw, grilled, smoked, boiled, baked, fried, steamed or stewed.

There are over 150 oyster varieties and listed below are the five most common of them.

Pacific oysters also known as Japanese oysters and creuse in France are the most common cultivated oysters. They have shells with naturally ruffled edges and distinctly elongated that range from gray, green to vivid multicolors of purple and jade. Pacific oysters have a sweeter taste

Kumamoto oysters are small and have a sweet taste. They have deep, bowl-shaped, sharp and pointy shells. They are widely cultivated in Japan and most popular in the US. Kumamoto oysters spaw later and in warmer waters.

Atlantic oysters are naturally found in the North American Atlantic Coast. They are known as the great American oysters and tends to be larger than the Pacific oysters. They have a tear drop shape with smooth shells and come in brown, cream or green colors.

Often called belons, European flats were once the most common oysters in Europe. They have smooth, flat shells with seaweed to sharp mineral taste.

Olympia oysters are the only oysters indigenous to the US Pacific West Coast. Similar to the European flats, they both are member of the Ostrea genus. They are smaller compared to the Kumamoto oysters and have a sweet, coppery to metallic taste.

Having said that oysters have impressive nutritional value, below are some health benefits one can get from eating oysters:

Oysters are high in protein which is necessary in building strong bones, muscles, skin and cells.

Iron, vitamin C and antioxidants are abundant in oysters. They are responsible for regulating body temperature and strengthening the immune system. The antioxidants and vitamin C can eliminate the free radicals in the body.

Minerals like Calcium, phosphorus, copper and selenium found in oysters are remarkable. They help in strengthening bones, increasing its durability.

Oysters have unbelievably high amounts of zinc compared to other food. Zinc helps in maintaining healthy immune system, fighting against illnesses and inflammation and promotes healing. As an aphrodisiac, zinc can help boost sexual performance and libido in men by producing more testosterone.

Oysters are nutrient packed foods with the lowest calories. People who are trying to maintain or lose weight do not have to worry about eating oysters as they can get more nutrients from oysters without gaining too much weight.

What Experts Say About Oysters… Is It Paleo?

“The most nutrient dense, the most expensive, the perfect accompaniment to lemon and hot sauce, oysters are truly the stars of the shellfish world”. – Mark Sisson

All you ever wanted to know about Oysters and Paleo

Mark’s Daily Apple. A Guide to Crustaceans, Bivalves and Molluscs, or Why You Should Be Eating Exoskeleton-Bearing Aquatic Invertebrates
http://www.marksdailyapple.com/types-of-shellfish/#ixzz3fqPiqj40

About Foods. Guide to Oysters
http://localfoods.about.com/od/shellfishrecipes/tp/oystertypes.htm