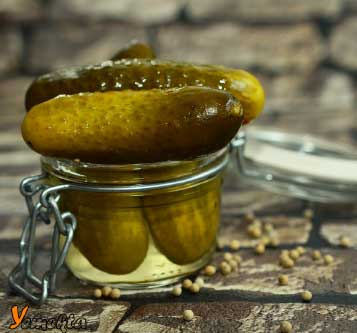 No, Pickles are not Paleo but…

Pickles are juicy, small, and sour cucumbers that are usually found as add on in burgers. They originated in the Himalayas and were cultivated in India for over 3000 years. These cucumbers are harvested before maturity and then soaked in salt and water to become pickles. Not only immature cucumbers are used to make pickles. Other fruits and vegetables such as onions, green beans, asparagus and radishes can also be used to make pickles.

There is a huge difference between fermented  pickles and store bought pickles. Most canned and bottled pickles found in groceries contain additives such as sugar, artificial color, preservatives and vinegar and are processed through high heat and pressure. Vinegar for instance provides the sour flavor in pickles but it prevents natural fermentation from occurring.  The chemical processes used to make commercial pickles destroy all the nutrients and health benefits that pickles can provide.

Fermentation is a natural chemical reaction that occurs in salt and water. Naturally fermented pickles could qualify as Paleo friendly because fermentation allows the growth of good bacteria and decreases the vulnerability of food from spoilage. These microbes that are byproduct of fermentation are proven to be good for gut health and digestion. Bubbies, for example is a good brand that sells naturally fermented pickles. They do not contain sugar and vinegar and only use sea salt. While Bubbies pickles could pass as Paleo friendly, it is always better to create your own pickles to make sure that only fresh and healthy ingredients are used for the fermentation process.

There are several types of pickles that are determined by the amount of salt used to prepare them. Some of them are the following:

Pickles may not be Paleo because they did not occur during the Paleolithic era and most available pickles are commercially processed. But let’s not disregard that pickles also have their fair share of possible health benefits that one can take advantage of.

Good source of nutrients and antioxidants

Pickles contain fiber, protein, beta carotene, vitamins B, C and K and minerals iron, manganese, copper, and iodine. They also have antioxidants that can protect the body by fighting against the harmful effects of free radicals.

Naturally fermented pickles contain probiotics that are known to improve digestion and enhance immune system function. These probiotics or good bacteria are byproduct of natural fermentation.

Pickles have the ability to prevent blood sugar from rising after a meal. This is because it can slow down the digestion process.

Some naturally fermented pickles found in stores can be expensive so you can try to make your own pickles at home. Aside from being cost effective, you can be very sure that you only use healthy ingredients for your pickles.

Making pickles only require little time for preparation and you can experiment with the taste by adding spices. The main ingredients in making your own pickles are cucumbers, sea salt and water. Adding peppercorns, chillies, garlic and other herbs are optional.

There are only a few steps in creating your pickles. First, combine salt and water and let it sit until the salt has dissolved. Wash your cucumbers and cut the tips on both ends. You can also try to cut the cucumbers in half or leave them as a whole. Put the cucumbers in a jar and add your desired herbs and spices. You can try almost any herbs and spices that you desire and you can start with garlic cloves, peppercorns and dill. Pour the salt water in the cucumbers until they have been fully covered. Set the lid loosely on top of the jar and store in room temperature. When you notice that white scum form on the surface of the jar, you can scoop them out. This means that the fermentation process has started. It may take 3-10 days before your pickles are ready. You can taste it once in a while to see if the texture and flavor suit your taste.

What Experts Say About Pickles… Is It Paleo?

“The Standard American Diet is definitely missing fermented food – unless you count cheap beer and box wine, of course. Even when we do eat foods that are traditionally fermented, like sauerkraut or pickles, they’re usually bastardized versions produced quickly for mass consumption. Most sauerkraut you can buy in the store, for example, is flaccid and mealy, rather than crunchy and tangy as it should be. That’s because most commercial sauerkraut (and pickles, for that matter) is preserved in vinegar instead of the traditional (and naturally occurring) lactobacterial-salt slurry.” – Mark Sisson

All you ever wanted to know about Pickles and Paleo

Paleo Leap. 5 Neglected Foods that can Make Your Paleo Diet Even Better

Chew the World. Are Pickles Paleo?

No Meat No Health. Are Pickles Paleo? It Might Not Be What You Think