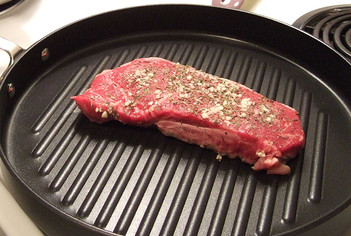 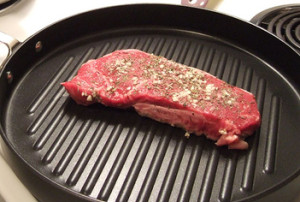 The Quality of Red Meat Matters…

Grain-fed beef, which is the majority of beef found in grocery stores, is less than paleo for a few reasons…

Grain-fed beef has a higher fat content, which isn’t necessarily bad, but the main problem is what is in the fat.

So, beef is Paleo if it’s grass-fed. However, if you must eat grain-fed beef, be sure you remove as much of the fat as possible or choose a lean cut. This will minimize your exposure to toxins. There are certainly things that are less paleo than eating lean beef :)

Red Meat is Good for You!

Although the mainstream recommendations for diet are generally to avoid red meat, the Paleo community disagrees!

Red meat is packed with important nutrients like B vitamins (niacin, thiamin, riboflavin and B6), which help the body’s metabolism, aid in red blood cell formation and play a vital role in our nervous system; iron, found particularly in red meat, helps maintain energy and carry oxygen through the bloodstream (and is especially important for teenage girls and women in their child-bearing years); magnesium, which is vital for building bones; and zinc, which is essential for our immune system.

Omega 3 and Omega 6 are considered to be essential fats. The human body needs these fatty acids in maintaining brain and nerve functions. Some studies show that Omega 3 and 6 may protect against Type 2 diabetes, Alzheimer’s disease and certain types of cancer. Particularly omega 3.

The perfect ratio of omega-6 to omega-3 fats is between 1:1 and 3:1. This is why you have to consider eating grass fed beef as they are healthy, well-raised animals that have an omega ratio of 1:1.

Large grazing animals are one of the foundations of the Paleo diet. For the beef to be considered Paleo, it should feed only on plants or grass, have not been raised in confinement and never fed antibiotics or growth hormones. No Corn fed cattle!

Lean meat, of grain-fed animals, is acceptable in the Paleo diet. If you would really love to eat beef, the cut must be put into consideration too.  The right kind of cut makes all the difference.

The beef cuts suitable for the Paleo diet are those with “loin” and “round” in its name. Examples are top round, round tip, top sirloin, bottom round, top loin and tenderloin. These cuts are very healthy and lean as they came from the part of the animal which does most jobs which are the legs, shoulder and girdle.

If you wish to eat steak, you can get the tenderloin part as mentioned above or sirloin. The tenderest part of the beef is normally the leanest. Flank steaks are also considered in the Paleo diet though it is more expensive.

And don’t forget the organ meats such as the liver, kidney, tripe, heart and brain.  They have the most concentrated source of vitamins, minerals, healthy fats and amino acids. Plus they are the cheapest part compared to the muscle meat.

What experts say about Beef.. Is it Paleo?

“Red meat is a rich source of vitamin B12, which is vital to proper functioning of nearly every system in your body. B12 deficiency can play a role in everything from aging, neurological disorders, and mental illness, to cancer, cardiovascular disease, and infertility. Red meat also contains significant levels of other B vitamins, including thiamin, riboflavin, pantothenic acid, folate, niacin, and vitamin B6. It’s crucial to get these vitamins from whole foods sources, rather than relying on government fortification of processed foods, and red meat is one of the easiest ways to ensure adequate intake”. – Chris Kresser

EUFIC. The importance of omega-3 and omega-6 fatty acids. 12/2008
http://www.eufic.org/article/en/artid/The-importance-of-omega-3-and-omega-6-fatty-acids/

Living Paleo. How to choose a cut of steak. December 27, 2011
http://www.livingpaleo.com/how-to-choose-a-cut-of-steak/

The Paleo Mom. Why Everyone Should Be Eating Organ Meat. April 7, 2012
http://www.thepaleomom.com/2012/04/why-everyone-should-be-eating-organ.html