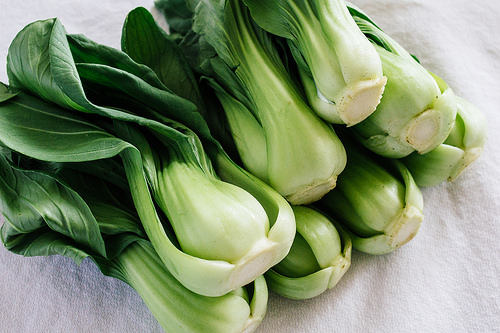 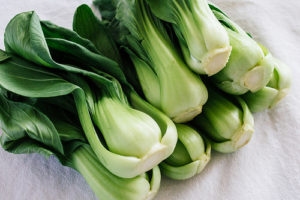 Bok choy is a type of Chinese cabbage that has a dark green, glossy, smooth leaves resembling to Romaine lettuce with white stalk. The distinct clustered individual leaves are similar to large celery stalks. It is a cruciferous vegetable from the Brassica family and is closely related to cabbage. The leaves of bok choy do not form a head that is why it is often referred to as a “non-heading’ Chinese cabbage.  Its taste is mild and not overpowering and can be described similar to mushrooms in a way. The stalk of bok choy is not usually white or cream in color. The two main varieties in which bok choy is categorized are the white petioled and green petioled. White petioled included joi choi, pak choi white, lei choi and taisai. The green petioled types are Chinese green pak choi and mei qing choi.

Bok Choy is native to China and has been cultivated here for centuries. Not only that it is part of Chinese cuisine, but it has also been in Traditional medicine. Nowadays, many different cuisines incorporate bok choy into their dishes. The entire vegetable is used for cooking. It is often used to add a satisfying crunch in salads. It can also be used in stir fries, soups, stews and coleslaws.

Bok Choy is available year-round but hitting peak season during the winter months.

Becoming popular among the cruciferous vegetables, bok choy stands out because of its richness in nutrients and antioxidants which are associated in preventing certain illnesses.

Bok choy is an excellent source of vitamins A, C and K, folate, vitamin B6, calcium and manganese. It is also rich in iron, vitamin B2, phosphorus, dietary fiber and protein as well as a good source of choline, magnesium, selenium, niacin, vitamin B1, copper, omega-3 fatty acids, zinc and pantothenic acid. Boy choy contains flavonoids like quercetin, kaempferol and isorhamnetin, and antioxidant phenolic acids..

This Paleo food is very low in saturated fat and cholesterol.

Vegetables from the Brassica family, including bok choy tend to be high in goitrogen substances. Again, goitrogens are substances that hinder the function of the thyroid glands, thus, causing goiter. Foods high in goitrogens must be avoided or consumed in limited amounts by people who suffer from thyroid problems.

Just because bok choy contains goitrogen doesn’t mean this should be eliminated in ones diet. Bok choy is a very nutritious food and the nutrients that it contains can outweigh its goitrogen contents. Eating bok choy together with foods high in iodine can balance the effect.

Other Names for Bok Choy

What Experts Say About Bok Choy

“Bok choy is loaded with calcium, Vitamin A, and vitamin C, and even if it weren’t, I’d still love it for the lack of strings.” – Mark Sisson

All you ever wanted to know about Bok Choy and Paleo

The Paleo Diet. Paleo and Breast Cancer Prevention: Is There a Link?

Mark’s daily Apple. You Don’t Have to Try to Like Celery Anymore

Live Healthy. How to Cook Bok Choy for Paleo Diet