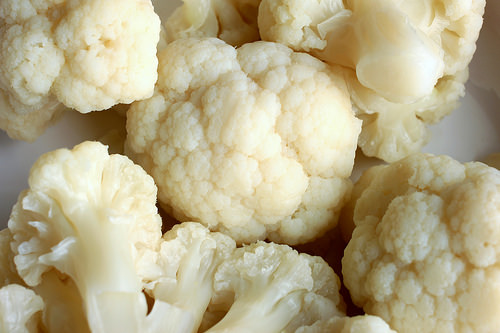 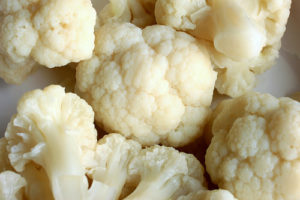 Cauliflower is an annual plant reproducing by seed and is one of the vegetables from the Brassica family including broccoli, kale, cabbage and collard greens. Its head or white curd is the part consumed and is composed of white, closely packed arrangement of undeveloped flower buds that resembles those in broccoli. The white curd is firm and slightly spongy in texture. It has a slightly sweet and nutty flavor.

Native in the Mediterranean region, cauliflower’s existence dates back to over 2,000 years. Cauliflower has many varieties and the common ones are classified according to their color. The four major color classification of cauliflower are white, green, purple and orange. The white one is the most common among all cauliflowers and examples are snow cloud, snowball, cloud and aviso. The green variety is often called broccoflowers. The curds can be similar to white cauliflower and can also be fractal spiral. The green type cauliflower includes Romanesco, Emeraude, Veronica and Minaret. Types of cauliflower under the orange cultivar include cheddar, orange bouquet and sunset. They contain 25% more vitamin A than the white variety because of its orange color. Lastly, the purple varieties are purple in color because of the anthocynanins present.Examples are violeta, graffiti, purple cape and mulberry.

As a member of the cruciferous vegetables, cauliflower is a very nutritious food that is loaded with vitamins, minerals, antioxidants and phytochemicals which are important for the healthy functioning of the body. It is an excellent source of vitamins A, B, C, K, folate and pantothenic acid. It is also rich in choline, dietary fiber, manganese, phosphorus, biotin, magnesium and potassium.

The amazing characteristics of cauliflower do not end with the above given remarkable nutritional value. In fact, there are many health benefits that cauliflower has to offer, as with other vegetables in the Brassica family.

Cauliflower contains glucosinolates which are sulfur-containing compounds that have benefits in the cardiovascular, digestive, immune, inflammatory, and detoxification systems of the body. Among the prominent antioxidants present in cauliflower are Vitamin C, beta carotene, caffeic acid, ferulic acid, quercetin, rutin and kaempferol.  Just to give emphasis, cauliflower is one of the foods rich in Vitamin C. Manganese in cauliflower acts a mineral antioxidant that has a vital role in oxygen-related metabolism. These antioxidants provide the cells to defense against oxidative stress. They also aid in preventing aging caused by stress and pollutants and even activate detoxification enzymes that assist in the body’s detoxification.

Cauliflower contains anti-inflammatory nutrients including indole-3-carbinol which is responsible in preventing inflammatory responses in the body.

Sulforaphane is present in cauliflower and most cruciferous vegetables. It is a sulfur compound known to inhibit cancer cells, slowing tumor growth. The indiles and isothiocyanates are other compounds in cauliflower that were found to inhibit development of cancer in the bladder, colon, breast, liver, stomach and lung.

Another remarkable benefit of sulforaphane in cauliflower is that it can improve and regulate blood pressure. It has the ability to bind with bile acids that helps regulate blood cholesterol levels. This promotes cardiovascular health.

Cauliflower contains significant amounts of dietary fiber which is essential for digestive health. The sulforaphane helps in protecting the lining of the stomach and prevents bacterial overgrowth in the stomach wall.

Choline is another abundant vitamin B in cauliflower which is important in brain development. It can help boost cognitive function and improve learning and memory. It can also aid in diminishing age-related memory decline.

What Can I Do with Cauliflower?

Cauliflower has unique characteristics that make it a versatile ingredient and deserves a place in ones diet because it contains a wide array of nutrients, antioxidants and phytochemicals. It can be eaten raw, steamed and can be a good addition to salads, stuffing and other dishes such as couscous. It has been used as an alternative to rice and mashed potatoes in the Paleo diet.

When steamed, cauliflower has a bland flavor that makes it a good replacement to rice and starch. It also provides structure to recipes. Cauliflower can be a good substitute to potatoes and other cream sauce because it turns velvety when steamed and pureed.

What Experts Say About Cauliflower

All you ever wanted to know about Cauliflower and Paleo

Mark’s Daily Apple.  Why You Should Eat Sulfur-Rich Vegetables