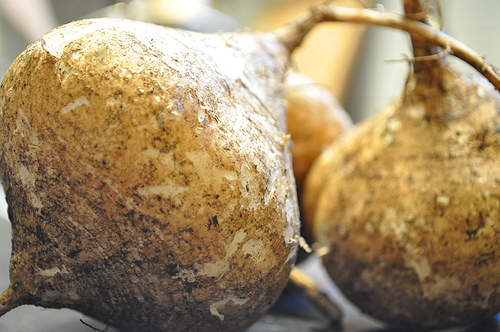 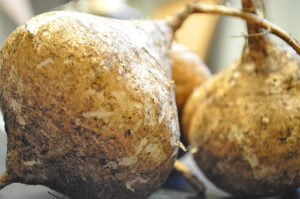 A member of the yam beans family, jicama is a crunchy, fleshy, round and starchy taproot vegetable that produces bean pods like lima beans where the root is commonly consumed.  It is one of the most popular edible tubers grown in many parts of Central America, Carribean, and Southeast Asia. The two varieties of jicama are jicama agua and jicama de leche. Jicama agua produces watery juice which is clear and sweet. It is more preferred than the jicama de leche which produces milky sap.

Jicama originally came from the Mexican peninsula but has also been grown and cultivated in Southeast Asia. The texture of jicama is similar to a turnip and its flesh is ice-white in color with a refreshing fruity, sweet taste that can be compared an apple and turnip. This tuber can be consumed in either raw or cooked form and has played an important part in traditional cuisines worldwide. It has greatly used in salads, stir fries and soups.

Jicama is very low in calories that it can be a good alternative to potato dishes such as French fries..

While jicama may not be a powerhouse when it comes to nutritional content, it has a very low glycemic index and considered a low-carb food. A cup of jicama actually contains only 12 grams of carbohydrates. It is rich in vitamins A and C, and contains humble amounts of minerals magnesium, manganese, copper, iron and potassium. Jicama is packed with fiber and is also a good source of inulin, which is a prebiotic type of fiber and friendly bacteria that lives in the gut.

Not because jicama is unlike other fruits and vegetables that are high in vitamins and minerals, it doesn’t mean that it could not be beneficial at all. In fact, it provides health benefits including weight management, digestive support, immune system booster, diabetes management and heart health.

Jicama contains approximately 40% of the daily requirement of vitamin C. As a natural antioxidant, vitamin C stimulates the white blood cells which are the body’s first line of defense against diseases. It fights against the effects of harmful free radicals in the body which is the major cause of cancer. The largest percentage of the body’s immune system is stored in the gastrointestinal tract. Jicama’s unique fiber called inulin helps balance the growth of good and bad bacteria that lives in the gut.

The high levels of dietary fiber in jicama provides digestive support as it adds bulk to stool, thereby helping in easy excretion in the digestive tract,reduces symptoms of constipation and treats diarrhea. Another benefit from the prebiotic inulin present in jicama is that it fights against the toxins and carcinogens in the gut and protects against tumor formation and cancer.

Jicama is also rich in potassium which is known to regulate blood pressure levels by acting as a vasodilator that reduces the tension on the blood vessels and arteries. Furthermore, the high amounts of dietary fiber in jicama have the ability to lower cholesterol levels and also campable in improving arterial health and reducing inflammation.

Because jicama is low in glycemic index, this starchy vegetable can help people who are struggling to balance blood sugar level or those suffering from diabetes. There is a low impact in the blood sugar when eating carbohydrates and fiber together.

Jicama is a great alternative diet for people who are trying to lose weight. That is because jicama is very low in calories. It is a snack that can reduce appetite without gaining weight.

Inulin found in jicama can help strengthen bones because it enhances mineral retention and absorption of calcium and suppresses the turnover rate of bone loss.

But Jicama is a Legume!

While it is true that jicama is a legume, the edible part or the root itself is not a bean. The negative effects of legumes actually come from the seeds. So Jicama is therefore safe to eat and is Paleo.

Other Names for Jicama

What Experts Say About Jicama

“Yet another low-carb addition to the Primal pantheon of culinary diversity, jicama is proving to be an interesting little root.” – Mark Sisson

All you ever wanted to know about Jicama and Paleo

The Simplicity of Wellness. Jicama

Mercola. Food Facts. What is Jicama Good For?