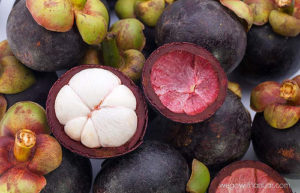 A native in Southeast Asia, mangosteen often revered as “Queen of Tropical Fruits” has gained its reputation worldwide as a health supplement, treating a wide variety of health concerns.  Mangosteen is deep purple in color when ripe and has a sweet, tangy flavor similar to lychee but is sweeter. Its size is the same as small orange with a round shape and flattened ends. It has a thick, hard and deep red rind with snow white flesh.

Mangosteen is commonly found in tropical rainforests of Indonesia, India, Malaysia, Philippines, Sri Lanka but Thailand is the largest producer and exporter of mangosteen and it is known to them as “mangkhud”.

Mangosteen is valued for its culinary, industrial and medicinal purposes. It is even used in Ayurvedic medicine. In the West, it is commonly consumed as a beverage.

Mangosteen is rich in water, energy, protein, carbohydrate and fiber. It contains impressive array of essential nutrients such as calcium, iron, magnesium, phosphorus, potassium, sodium, zinc, copper and manganese. It has a good serving of vitamins A, B6, B12 and C. Other minerals and phytochemicals such as thiamin, riboflavin, niacin, pantothenic acid, folate, and xanthones are also found in mangosteen.

Mangosteen is a healthy fruit that is not only rich in colour and flavour but abundant in potent health properties too. They include reduced risk of cancer, inflammation, allergies and diabetes.  Mangosteen has antioxidant, antifungal, and antibacterial properties too that help in protecting the body against various health problems.

For so many years, mangosteen extract has been used to fight allergy and inflammation especially in Southeast Asian countries. Its anti-inflammatory properties inhibit the release of histamine and prostaglandin which are associated with inflammation.

Another health benefit of the antioxidant xanthone in mangosteen is that it supports many vital functions of the body and boosts the immune. Vitamin C which is rich in mangosteen also acts as a natural antioxidant that helps in scavenging harmful free radicals that cause illnesses. It also stimulates the production of white blood cells that protect the body from infectious diseases.

Mangosteen is also high in fiber which makes it good for digestive health. It aids in prevention of constipation and increases intake of probiotics. The pericarp and peel of mangosteen is also effective in providing relief from stomach disorders like diarreha and dysentery.

Studies have shown that mangosteen contains at least 20 known xanthones that have natural chemopreventive agents and it can be used as a cancer treatment together with other existing therapies. The xanthones have also shown their ability to control cancer cell division and growth, programmed cell death, inflammation, and cancer metastasis.

Mangosteen has the ability to maintain normal blood sugar level because it acts as an alpha-amylase inhibitor that inhibits enzymes causing starches to breakdown into glucose.

The pulp of mangosteen has been found to be anti-bacterial that prevents infection and reduces skin irritation. It is used topically to treat certain skin conditions such as acne and eczema.

Catechin is a compound found in mangosteen in higher concentration. It is well documented for its ability to aid in weight loss.

Other Names for Mangosteen

All you ever wanted to know about Mangosteen and Paleo

SFGate. What Is Mangosteen Fruit?

Nutrition and You. Mangosteen Nutrition facts