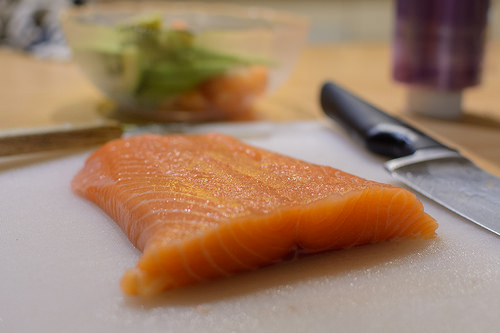 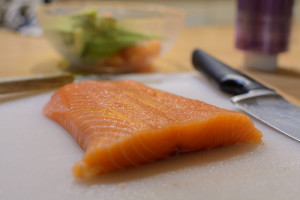 The Popular and Nutritious Salmon

Salmon is an anadromous fish that is born in fresh water, migrate to ocean and returns to freshwater to spawn. It can be found in both Atlantic and Pacific oceans as well as inland lakes. The flesh of the salmon fish varies in color from pink, red and orange and has a delicate, sweet taste.

Salmon is an oily, fatty fish and is considered to be one of the healthiest fishes around due to its high protein, omega 3 fatty acids and vitamin D content. It supplies minerals such as calcium, iron, zinc, niacin, selenium and vitamins B6 and B12.

Like other fishes, it can be consumed in fresh form, baked, broiled, smoked or grilled.

Eating salmon can provide a wide range of health benefits.

Salmon is rich in Omega 3 fatty acids and has an outstanding Omega 3 and 6 ratios. Omegas 3s are known to have anti-inflammatory properties and can promote cardiovascular health. Other benefits from omega 3 consumption are joint protection, eye health and decreased cancer risk.

Salmon is a complete source of protein too. Protein helps in repairing and rebuilding body cells. Protein in salmon is also digestible and easily absorbed by the body. Based on recent studies, salmon contains small bioactive protein molecules called bioactive peptides that provide support for joint cartilage, insulin effectiveness and control of digestive tract inflammation.

Selenium is a mineral that helps in proper thyroid function. It also helps in boosting immune system and destroys harmful free radicals. Salmon is high in selenium and low in mercury. Selenium binds with mercury which protects the body from harm.

Salmon consumption can increase brain functions and improve memory because of the omega 3 fatty acids it contains. Vitamins A and D and selenium in salmon can protect the nervous system from damage related to aging, can act as anti-depressant and helps in treating Alzheimer’s and Parkinson’s diseases.

The omega 3 fatty acids in salmon help in cholesterol reduction and lowering blood pressure. It also decreases the risk of heart attack.

Salmon is a healthy option when wanting to have a healthy diet. But not all salmons are created the same. Contaminants and risks can sound alarming when choosing the salmon to be incorporated into ones diet. Confusion also comes in with the differences between farmed and wild salmon.

Difference Between Farmed and Wild SalmonNutrition

Farmed salmon comes with the uncertainty of the use of antibiotics. Antibiotics in farmed fish lead to resistance to their effects. Wild salmon are never treated with any of these antibiotics.

Fish farming can have serious harmful effects. Salmon which are bred inside net cages are known to leach pesticides, viruses and antibiotics. The spread of sea lice is another risk of fish farming that lead to the death of 80 percent of local salmon.

Salmon is stellar for one’s health and both farmed and wild salmons offer significant nutrients. But the wild salmon is a better option. Farmed salmons are high in contaminants and the risks associated with them  are higher compared to the concerns about wild fish.

What Experts Say About salmon… Is It Paleo?

“Eat up to 12 ounces (2 average meals) a week of a variety of commonly eaten fish and shellfish found consistently low in mercury, including shrimp, canned light tuna, salmon, pollock, and catfish” – Chris Kresser

“smoking salmon at a high heat protected the omega-3s from oxidizing to a greater extent than leaving it alone, even if antioxidants were added to the fresh salmon oils. That said, when heating the smoked salmon fat past 75 degrees C, peroxides formed at a faster rate than in the fresh salmon fat”. – Mark Sisson

All you ever wanted to know about Salmon and Paleo