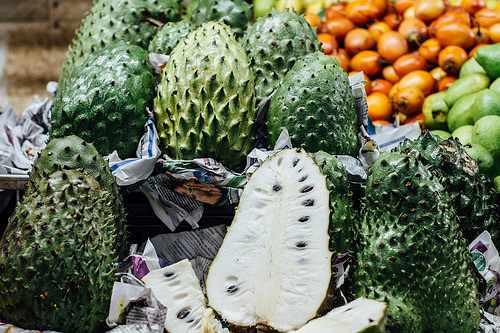 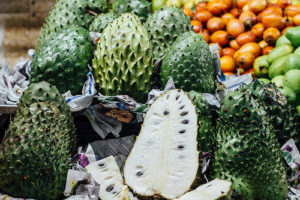 Known to have a few names such as graviola, guanaba, pawpaw and guyabano, soursop is often a gigantic fruit from a tree found in the rain forests of South America and South East Asia. It is green in color with a spiny, inedible skin that turns yellowish green when mature. It has a similar scent to pineapple but its flavor is a bit musky. The flesh of guyabano is fibrous, juicy, and creamy white in color with hard black seeds. It has a distinct, sweet taste and has been described as a combination of pineapple and strawberry.  Soursop is grown commercially to make beverage, candy, ice cream and other desserts. Its leaves and pulverized seeds are brewed to become a powerful tea.

The medicinal qualities of soursop are widely promoted especially it being an alternative cancer treatment. Several studies have been circulating in the Internet but no human tests have been made so far and no strong evidence yet shows that it works as a cure for cancer. But it doesn’t mean that soursop has no use at all. Soursop has a long history in ancient herbal remedies and treatments. With all the nutrients found in soursop, it has medicinal benefits and is good for the body like other fruits do.

While soursop’s flavor is enough to make it popular, this superfruit is rich in vitamins and nutrient contents. Soursop contains high amounts of antioxidant compounds, vitamin C, B vitamins such as thiamine, niacin and riboflavin and minerals calcium, and phosphorus. Soursop also has significant amounts of iron. These vitamins and minerals are why soursop benefits include potentially helping reduce eye disease, treat infections and potentially even fight cancer.

While its rind is quite bitter, the soft flesh of soursop offers carbohydrate as its main nutrient. It is also free from fat, cholesterol and sodium.

Beyond its usefulness as a food, soursop contains natural compounds with medicinal properties that demonstrate impressive health benefits. Some of them include its ability to reduce inflammation, kill parasites, improve respiratory healh, boost immune system, soothe stomach, relieve pain and prevent cancer.

The phytonutrients present in soursop are high in antioxidant compounds including alkaloids, saponins, terpenoids, flavanoids and phenols which can help fight age-related eye disease such as macular degeneration.

The leave extracts of soursop shows anti-inflammatory and antimicrobial characteristics. Soursop can be a natural anti-infection treatment.  It helps clear fungal and bacterial infections and intestinal parasites. The anti-inflammatory compounds in soursop can speed up healing and soothe pain related to joints.

Because soursop contains high amounts of vitamin C, it helps in the production of white blood cells, helps neutralize free radicals and prevent chronic diseases. The other phytonutrients found in soursop are beneficial in building and strengthening the body’s immune system.

Soursop has been traditionally used as a natural remedy for scurvy and dysentery. Its juice has shown to be an effective diuretic and therefore cleans the gastrointestinal tract and removes excess toxins from the body. Alkaloid and quinolones are anti-inflammatory components in soursop that reduce the parasites in the gut.

Another benefit from anti-inflammatory properties of soursop is that it can help relieve congestion and clear out airways especially when struggling from cough, colds or any other respiratory ailments. Soursop also acts as an expectorant that aids in eliminating phlegm and mucus.

The mashed leaves of soursop can be applied topically to skin with eczema and acts as a pain reliever.

The alkaloids and quinolones have been linked to reduced size of tumors and cancer prevention. Based on studies, the leaf extracts of soursop may have a positive cancer-fighting effect due to its free radical scavenging abilities and antioxidant properties.

Though soursop seems to be beneficial to one’s health, avoid consuming in large quantities because the alkaloid compounds of soursop may cause neurological symptoms similar to Parkinson’s disease.

Other Names for Soursop

All you ever wanted to know about Soursop and Paleo

SF Gate. The Benefits of Soursop

All For Healthy. Soursop How To Cure Cancer?

Health Habits. The Best Tasting Fruit You Have Never Tasted