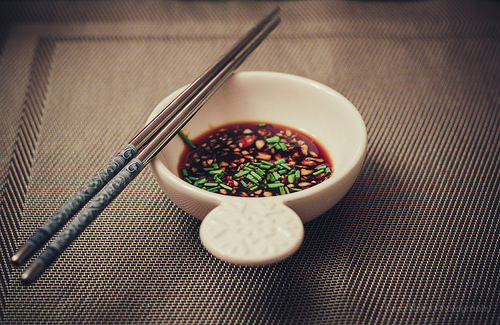 No, Soy Sauce is not Paleo but…

Fermented Soy Could be Preferrable

Soy sauce has been a popular condiment across all continents especially in every Asian cuisine. It originated in China and been used to enhance the flavor of many food and meals. Soy sauce is a thin, dark brown, salty sauce made from fermented soybean paste.  Its main ingredients are soy, salt and water. Traditional soy fermentation includes grains and bacteria Aspergillus oryzae. Non-traditional fermentation on the other hand includes a process called hydrolysis and the product’s taste and texture is different compared to the traditional one.

Soy is not approved in the Paleo diet because it is a legume and it is high in phytic acid and lectins that are harmful in the gut lining and can cause inflammation. Soy also needs preparation such as fermentation and other chemical processes before it could be safely consumed. Most of the time there are artificial flavorings added during the process to improve the flavors.

With the case of soy sauce, traditional fermentation is used. Fermentation eliminates the anti-nutrients that the legumes contain. Fermentation makes the soy isoflavanones bioavailable to human and fermented soy sauce has displayed increased levels of antioxidant compounds. While traditional fermentation of soy is not approved in the Paleo diet, it is much prefered compared to the unfermented or chemically processed soy sauces. While most available soy sauces in the market are chemically processed, make sure to choose fermented ones.

The main reason why soy should be avoided is because it is a legume and it contains nutrient blockers such as lectins and phytates that are harmful to the body. These nutrient blockers are the ones protecting the soybean from being eaten by other animals.

Soy contains high levels of phytates that binds important minerals in foods which makes them unavailable for the body to use. It can cause bloating, gas and inflammation. Lectins mess with the leptin sensitivity and can affect appetite. Leptin resistance could lead to insulin resistance and in the long run could lead to metabolic problems.

Soy is also known to be goitrogenic. It inhibits the thyroid’s ability to utilize iodine correctly which could lead to hypothyroid problems. Thyroid problems are prevalent nowadays especially in women and can cause a decrease in metabolism, frequent colds and low energy.

Another problem with soy is it contains protease inhibitor called trypsin, a toxin that blocks the action of enzymes responsible for digesting certain proteins.

Soy sauce is not Paleo and avoiding it is not the end of the world. In fact, there are substitutes recommended to replace soy sauce.  Coconut aminos is a liquid made from aged sap of coconut blossoms and salt. It is about 65% less sodium compared to regular soy sauce. It is low in glycemic index and is gluten-free. Coconut aminos have rich, sweet, savory taste and not as salty as soy sauce. It is a very good replacement to soy sauces when following the Paleo diet. Coconut aminos can be found in health-food stores.

Soy is not Paleo and so is soy sauce, be it traditionally or non-traditionally fermented. However, soy sauce made through traditional fermentation without flavorings added can be preferred as long as it does not cause problem to the body. There are also substitutes to soy sauce such as coconut aminos which are healthier addition to Paleo diet.

What Experts Say About Soy Sauce… Is It Paleo?

Long, slow fermentation (as in the traditional production of miso, tempeh and soy sauce) gets rid of the phytic acid and other digestive inhibitors but not the phytoestrogens in soy. – Chris Kresser

All you ever wanted to know about Soy Sauce and Paleo

Is Soy Sauce Paleo? Bacteria, Wheat, and the Things You Don’t Know

Paleo Grubs. 27 Paleo Diet Food Substitutions (Use This, Not That)

Paleo Leap. The Dangers of Soy