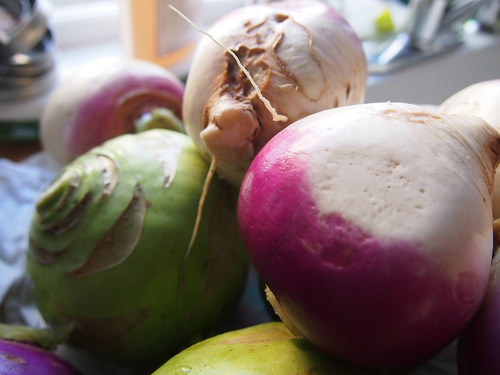 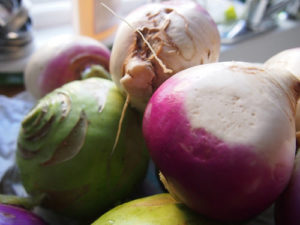 What is a Turnip?

Turnip, though often grouped with other root vegetables like potato and beets, is a nutritious root vegetable that belongs to the family of Brassica which is a broad family of green vegetables such as cabbage, kale and brussels sprouts. This small, bulbous, round, white-skinned root with purple top when exposed to sunlight has a white flesh and grows in many parts of Europe and Asia. Turnip tastes similar to radish and potato. Its sweet flavor adds a fantastic taste to any dishes. It is also one of the cool-season vegetables.

Turnip is one of the first cultivated vegetables with records dating back 17,000 years ago. It has been a popular staple in the Europe especially in Greek and Roman diets.

Young turnips or baby turnips are delicate and has a sweeter taste compared to the regular turnip. They can be eaten raw as they tend to be less spicy and have a milder flavor.

Along with the roots, the tops or leaves of this vegetable also known as turnip greens are also edible and known to be more nutritious than its root as they are richer in vitamins, minerals and antioxidants. Its taste is similar to mustard greens.

Turnips are easy to cook and store and could be a great addition to ones diet.

Turnip is a powerhouse of nutrients like other cruciferous vegetables and has a low amount of calories. Like sweet potatoes, it is a rich source of complex carbohydrates without gluten which can be difficult to obtain on a grain-free diet such as Paleo. It can supply great amounts of minerals, antioxidants and dietary fiber. Turnip is one of the vegetables that is loaded with vitamin C which is essential in fighting oxidative stress and inflammation and boosting immune system.

The turnip greens are also rich in vitamins A, C and K, carotenoids, lutein and xanthin. Omega-3 acids such as alpha-linoleic acids are also present in turnip greens which are essential anti-inflammatory compounds. Turnip greens also contain B vitamins like riboflavin, folates, panthothenic acids and thiamine and minerals such as calcium, copper, manganese and iron.

Apart from the nutrients that turnip contains, there are lots of benefits that it can offer too. Listed below are the health benefits of eating turnip.

As with other root vegetables, turnip contains complex carbohydrates. Though carbohydrates are not bad as they seem, in the Paleo diet, it must be consumed moderately as it is a low-carb diet. Not all people are trying to lose weight. Turnip could be a good addition to ones diet especially for people who are trying to maintain or gain weight.

Vegetables from the Brassica family have compounds called glucosinolates which can interfere with the thyroid gland function when taken excessively. These compounds can result to production of goitrin which inhibits thyroid hormone production.

What Experts Say About Turnip

“The sweet flavor of turnips adds mild but fantastic flavor to this hearty bison & egg scramble. Garnish with green onions for a simple but super-flavorful breakfast”. – Mark Sisson

Other Names for Turnip

All you ever wanted to know about Turnip and Paleo

Paleo Grubs. Foods You Can Eat on The Paleo Diet

SFGate. The Health Benefits of Turnips