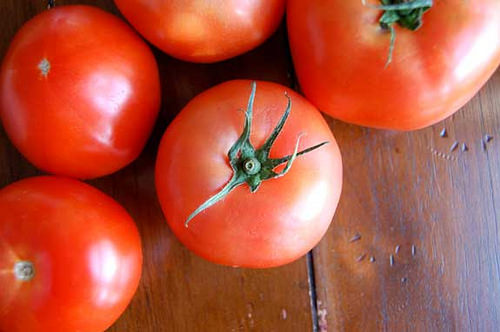 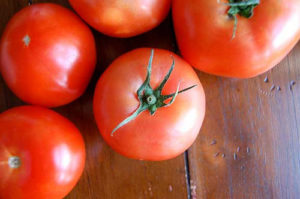 Similar to eggplant, tomato is also a fruit and a berry. It came from the plant family of Solanaceae or nightshade as we call them. Tomato is often round in shape and has reddish orange color. It is a very versatile food that comes in different varieties, varying from shape, size and color. Some of the most popular varieties are cherry tomatoes, bright yellow tomatoes, green tomatoes and Italian pear-shaped tomatoes. Beef master tomatoes are one of the larger-sized varieties and Roma tomatoes are of the intermediate size.

Originally cultivated in South America, Mexico particularly, tomatoes spread throughout Europe and has been a staple in Italian recipes. The entirety of tomato can be eaten except for the leaves where most of the lectins are stored.

Tomato has a smooth skin with fleshy, watery inside with segments filled with slippery seeds. It has a subtle sweet taste that’s why it is more often considered as vegetable than a fruit.

Be Healthy With Tomatoes

Tomato is a powerhouse of vitamins, minerals and phytonutrients. It is a very good source of Vitamins A, B and C and mineral manganese. Tomato is abundant in phytonutrients. This includes carotenoids, flavanones and glycosides.

Lycopene is a carotenoid pigment that gives tomato its bright red or orange color. Lycopene is one of the most powerful antioxidant available to us. Together with beta carotene and esculoeosides ,these phytonutrients have antioxidant and anticancer properties that promote bone, liver, kidney, blood and immune health. They also provide cardiovascular support by decreasing total cholesterol and triglyceride in the blood.

Tomatoes Belong to the Nightshade Family!

On our previous post on eggplant, we mentioned that potato, eggplant and tomato all belong to the nightshade family. Yes tomato is a nightshade!  It contains lectins, saponins and trace amounts of alkaloids, which are known to trigger inflammation in the joints, some autoimmune diseases and digestive problems in some people. But this doesn’t mean you can no longer eat tomatoes.

Cooking nightshade vegetables and fruits can reduce its alkaloid levels up to fifty percent less. So might as well consider not eating tomatoes raw.

Paleo diet experts only recommend restricting from eating tomatoes and other nightshades like eggplants if you have these autoimmune and digestive problems. It is always best to keep in mind that if you have been eating tomatoes for the longest time and you haven’t noticed any ill effects, then tomatoes are definitely okay. But again, if you are one of the few who are intolerant to lectins and saponins, then might as well keep away from tomatoes.

What Experts Say About Tomatoes

“So the bottom line is that tomatoes contain two substances that are routinely used in the manufacture of vaccines, an adjuvant (alpha tomatine) and an immunogen (tomato lectin/microbial antigen complex). Hence, in theory, there likely is a scientific basis for the use of nightshade free diets in the treatment of rheumatoid arthritis.” – Dr. Loren Cordain

Other Names for Tomato

All you ever wanted to know about Tomato and Paleo

The WHYs behind the Autoimmune Protocol: Nightshades

Quora. Why does the Paleo diet object to tomatoes and peppers?