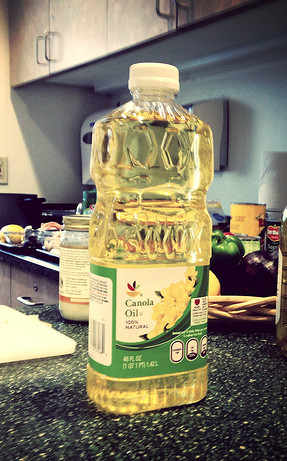 No, Canola Oil is not Paleo! 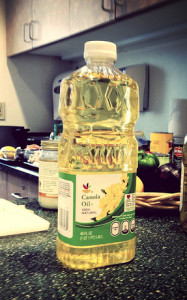 Canola oil is an edible oil produced from rape seed plant which is from the brassica family as broccoli and cabbage. It is yellowish in color, has a mild smell and somehow tasteless. It is made by slightly heating and crushing the seed. Rapeseed oil has been used as an industrial oil and not for human consumption because of its erucic acid content that is found to be toxic. Erucic acid is not a water soluble fats and can be dissolved in methanol and ethanol. It is used to make a wide variety of chemicals. Some studies have shown that erucic acid can do potential damage to the heart.

Canola stands for Canada oil or Canada Oil, Low Acid and is industrial oil and compared to rapeseed oil, has lower contents of erucic acid. It is a hybrid oil (there’s no such thing as canola plant!) made from rapeseeds less the undesirable compounds. Canola oil is low in saturated fat at 7% and is high in monounsaturated fats at 63%. It contains high level of polyunsaturated fats too at 28%. Both omega 3 and 6 fatty acids are present in canola oil in a ratio of 2:1.

Most of the available canola oil in the market is refined and partially hydrogenated. Other use of canola oil aside in cooking is it is used as biodiesel, lubricants, cosmetics, nylon and polyester.

To produce canola oil, the rapeseed plant undergoes several procedures; First, the seeds are cooked/ heated, then are pressed to extract oil. Most of the time, the seeds are treated with chemicals (hexane solvent) to produce more oil. After extraction, the oil will go through degumming, a process of removing solids that usually settle upon storage that require heat and sometimes use addition of acids.  Next the oil will be bleached and separated. Lastly, canola oil will be deodorized using heat again as high as 500°F.

Why Canola Oil is Not Paleo?

The use of canola oil has widely spread over the years because according to experts, it is“heart healthy oil”.  It contains a little bit of vitamins E & K and can lower cholesterol level in the body. While it is true that the ratio of Omega 3 to 6 in canola is balanced (2:1), consuming a lot of canola oil can also raise the amount of polyunsaturated fats level which can cause chronic inflammation. The polyunsaturated fats in canola oil make it easy to oxidize in heat (that can produce toxins like AGEs) and turn rancid in the shelf.

The erucic acid content of canola oil, though lower compared to the original rapeseed oil, can still increase the risk of developing harmful conditions to the body because of its toxicity. Some of these problems may be associated to liver and kidney, increased blood sodium levels and allergic reactions.

Most canola oils available in the market nowadays are refined, meaning it has undergone several chemical processes. (Think of all the chemical compounds added in the oil during the process!) . In one study, up to 4.6% artificial trans fats are formed in canola oil during the process. These artificial trans fats are harmful to the body and are associated with serious illnesses especially heart diseases.

It is very difficult to find canola oil which is cold pressed and unrefined. And they are way more expensive. Plus I mentioned above that the crops used to produce canola oil are predominantly genetically modified.

In the Paleo diet, chemically processed and treated foods are not allowed. That is the main reason why canola oil should not be consumed.

What Experts Say About Canola Oil.. Is It Paleo?

“Other negative effects of canola oil consumption in animals at 10% of calories include decreased litter sizes, behavioral changes and liver injury. A number of recent human studies of canola/rapeseed oil by Dr. Poiikonen and colleagues at the University of Tempere in Finland has shown it to be a potent allergen in adults and children and may cause allergic cross reactions from other environmental allergens in children with atopic dermatitis (skin rashes).  Based upon these up to date studies in both humans and animals, I prefer to err on the “safe side,” and can no longer recommend canola oil.” – Dr. Loren Cordain

“Canola oil isn’t part of the recommended Primal foods for a number of reasons actually… Canola was a hybrid derived from rapeseed to reduce the high erucic acid content of traditional rapeseed oil, which had a bitter taste and toxic effects from the acid.” – Mark Sisson

All you ever wanted to know about Canola Oil and Paleo

Diane Sanfilipo. Canola Oil May Be “Paleo Diet” Approved, But I Won’t Eat It
http://balancedbites.com/2010/06/canola-oil-may-be-paleo-diet-approved-but-i-wont-eat-it.html

Other Names for Canola Oil