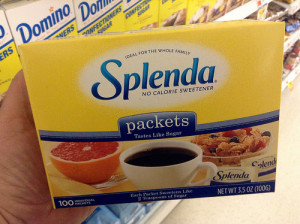 No, Splenda is not Paleo..

Splenda is a commercial name and registered trademark of a sucralose-based artificial sweetener derived from sugar owned by the British company Tate & Lyle and American company Johnson & Johnson. It is created by substituting one part of a sugar molecule with chlorine to create a substance that is about 600 times sweeter than sucrose. Sucralose can be used as a replacement for sugar in nearly every kind of food or beverage. This sweetener first received FDA approval in 1998 for specific foods and then again in 1999 as an all-purpose sweetener. Sucralose also differs from other artificial sweeteners in that it passes through the digestive system without being metabolized, which is why it contains no calories.

Splenda Sucralose is one of the popular sweeteners in the market and is well known from its claims that it is made from real sugar. Sucralose has no caloric content, and Splenda products have a lower caloric content than sugar.

Splenda was created as a no-calorie artificial sweetener that was supposed to help you cut sugar out of your diet altogether. Studies have been done on Splenda to show that it may not be all its cracked up to be, either. For example, Splenda is made by using chlorine. While there are only small traces of chlorine found in Splenda, some studies have suggested that this could be harmful to the body if you use it regularly for a long period of time.

In one report from Nasdaq, after a study made on Splenda, it was said that there is potential for disturbing side effects from the ingestion of Splenda. Among the results are Splenda  reduces the amount of good bacteria in the intestines by 50%, increases the pH level in the intestines, contributes to increases in body weight and affects the P-glycoprotein (P-gp) in the body in such a way that crucial health-related drugs could be rejected. Although the effect of consuming Splenda does not result from a one-time use, the side effects do occur after accumulated use.

Some other studies have suggested that aggression in young children may be the result of them eating and drinking Splenda too.

Splenda, as well as other artificial, man-made sweeteners, should be avoided in general in the Paleo Diet. It can have a negative side effect on you as it contains neurotoxic poisons. Anything artificial is not Paleo!

What experts say about Splenda.. Is it Paleo?

“It appears that a small number of people do have experiences resembling allergic reactions to the sweetener. Although we couldn’t find reliable human studies that measured or confirmed these symptoms’ relation to sucralose, there are probably enough stories out there to suggest that people play it safe and “test” their reaction to the sweetener with small doses initially. Also, as we said earlier, if the food or drink isn’t something that offers a real benefit to your body, you’re probably better off finding an alternative.” – Mark Sisson

“The moral of this story:  It’s a ‘bitter’ truth.  There is NO 100%, put me in your coffee, eat me everyday sweetener.  Is a ‘sane’ indulgence from time to time acceptable?  Heck yes!  But daily ingestion of sweeteners, calorie free sweeteners, and processed additive laden foods are not part of the “Paleo Solution”.  Make your future a ‘sweet’ one – stick with real, whole foods and give up the search for the ‘golden ticket’ to Candy Land.” – Robb Wolf

All you ever wanted to know about Splenda and Paleo

Paleo Grubs. What You Can’t Eat on the Paleo Diet
http://paleogrubs.com/foods-to-avoid

Mark’s Daily Apple. On the Question of Sweeteners. April 9, 2014

Livestrong.com. Does Splenda Sugar Substitute Have Chlorine in It? Angela Brady. June 11, 2011.
http://www.livestrong.com/article/468436-does-splenda-sugar-substitute-have-chlorine-in-it/

Other Names for Splenda