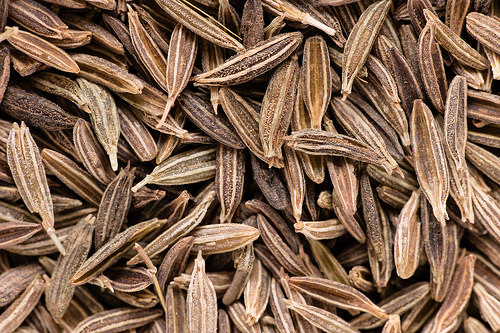 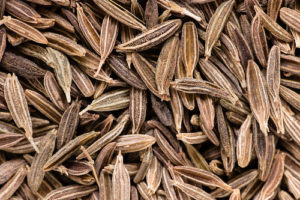 Cumin is a dried, pale green seed of the plant from the family Apiaceae, which is closely related to parsley and is native to East Mediterranean region. The seeds can both be used in whole or ground form. It has a very distinct, sharp, nutty flavor and is widely used in Mexican, Spanish and Indian cuisine since ancient times. Cumin has been a staple in most curry powders and spice blends and used in savory recipes such as taco seasoning, chilli, stews, meats, fish and vegetables.

Traditionally, cumin has been used a natural remedy to certain illnesses and is considered as a medicinal plant. It is used as a diuretic, a treatment for swelling and sore throat.

Like most spices and herbs, cumin contains significant amounts of vitamins B and C, calcium, iron, magnesium, manganese and phosphorus.

Cumin is great flavoring to foods but its potential health benefits are impressive too, from anti-glycation, anti-carcinogenic, anti-osteoporotic and much more.

Cumin can help stimulate the pancreatic enzymes that are necessary for proper digestion and nutrient assimilation. The aroma of cumin comes from cuminaldehyde, an essential oil that activates the salivary glands and facilitates food digestion. Cumin is also caminative, which relieves from gas problems.

The high amounts of vitamin C and antioxidants in cumin can prevent the damaging effects of free radicals in the body. Vitamin C acts as a natural antioxidant and  it defends against other infections and toxins as well, further boosting the immune system.

Cumin has been found to have a powerful effect in preventing diabetes and reducing chances of hypoglycemia. It is effective in increasing insulin sensitivy especially for people suffering from diabetes.

Cumin has detoxifying and anti-carcinogenic properties. The cancer-protective effect of cumin is due to its potential free radical scavenging abilities.

The presence of iron, vitamin C and essential oils are helpful in boosting immune system and stimulating the function and activity of the white blood cells. Vitamin C and antioxidants can fight against the effects of free radicals, preventing certain diseases.

Cumin has anti-asthmatic properties and acts as a bronchodilator. It suppresses the development of coughing by drying up the excess mucus. Cumin contains caffeine which is a stimulating agent. This makes cumin as an anti-congestive and expectorant.

The iron found in cumin can lead to cognitive performance and decrease risks of brain disorders such as Alzheimer’s disease and dementia. Cumin is also found as protective against memory loss.

What Experts Say About Cumin

As is usually the case with spices that have been in use for thousands of years, cumin appears to provide a number of potential health benefits, from anti-glycation agent to antioxidant to anti-osteoporotic, and much more. – Mark Sisson

All you ever wanted to know about Cumin and Paleo