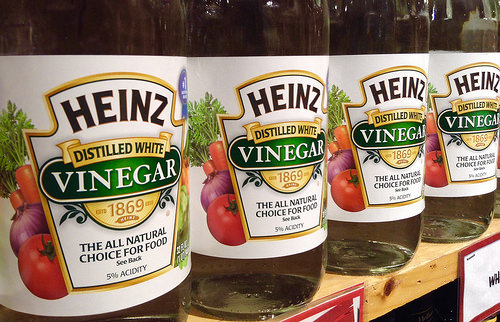 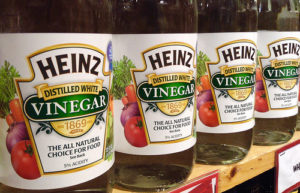 No, Vinegar is not Paleo but…

Vinegar Can Be Paleo-Friendly

Just like saukeraut and kimchi, vinegar is a by product of fermentation of foods rich in carbohydrates such as apples, rice, oats and barley. It is simply a fermented liquid consisting mainly of diluted acetic acid. In cooking, vinegar is commonly used in salad dressing, pickling and as preservative.

Making vinegar involves two steps. The first step is making an alcohol where the food is crushed and exposed to yeast. This ferments the sugar and turns it to alcohol. The second step is adding bacteria to the alcohol solution. This step further ferments the alcohol and turns to acetic acid; the major component of vinegar.

Vinegar is not Paleo basically because it was introduced to the human diet after the Paleolithic era. It is not a natural product of the environment but a result of a natural process like fermentation. Assuming that during the natural process, there are no preservatives, sugar or salt added and only natural ingredients are used to produce vinegar, then it may be allowed in the Paleo diet.

There are numerous types of vinegar but the most common ones are apple cider and balsamic vinegar. Apple cider vinegar is made from apple or cider and has a pale to medium amber color. It is common in salad dressings, marinades, vinaigrettes, chutneys and food preservatives. Apple cider vinegar has antibacterial properties that can support digestion and immunity.

In addition to enhancing the taste of food, vinegar also offers a few health benefits.

Vinegar is not considered as Paleo because it was not present during the Paleolithic era and it involves natural processes before it can be consumed. But because of the health benefits that vinegar can provide, it can be Paleo friendly. After all, Paleo diet is about eating healthy food that can benefit the body. It must only be considered that moderation is always the key. Sprinkling small amount of vinegar to your salad might not hurt you anyway and there’s no way that you will ever drink a glass of vinegar too.

What Experts Say About Vinegar… Is It Paleo?

“Vinegar is typically made with 5% acetic acid and may contribute to net acid load. If you are consuming plenty of fruits and veggies in your diet (about 30-35% total calories), a little vinegar occasionally should be no problem.” – Loren Cordain

“The primary component of vinegar is acetic acid, a product of fermentation by acetic acid-making bacteria. Acetic acid is a corrosive agent that can cause permanent damage to eyes, skin, and (I’d imagine) various orifices. It’s even flammable. Wow. Sounds awful, right?” – Mark Sisson

All you ever wanted to know about Vinegar and Paleo

Paleo Leap. What About Vinegar?